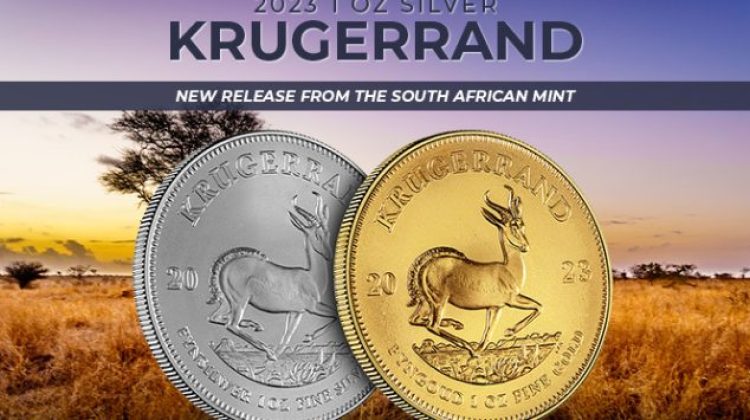 There are many accolades and titles that bullion coin collections around the world hold or claim. The most popular series, the best-selling series, the most diverse, and so on. There is only one collection that can lay claim to the sort of titles the South African Krugerrand has earned over the course of time. As the oldest and longest-running bullion series in the world, the 2023 South African Krugerrand Gold Series marks its 57th year with the new coins now available online at Provident Metals.

For the obverse side of the 2023 South African Krugerrand Gold Coin, the South African Mint and Rand Refinery continue with the use of Paul Kruger’s effigy. The depiction on this side of the coin captures Kruger in left-profile relief with his iconic beard and effigy. The image of Kruger has appeared since 1967 and comes with inscriptions in Afrikaans and English that read SUID-AFRIKA and SOUTH AFRICA.

In the reverse design of 2023 South African Krugerrand Coins, you will find an image of the Springbok antelope. This image captures a view of the antelope as it is pronking, a movement that sees the animals leap as high as four feet off the ground with all four legs in the air at once. This design has also been in use on the coins since 1967 and shows the creature in right-profile relief with inscriptions of KRUGERRAND, 2023, and the respective weight and metal content.

The 2023 South African Krugerrand Series offers both gold and silver coins. Since 1980, the gold series has consisted of 1 oz, 1/2 oz, 1/4 oz, and 1/10 oz gold coins. The 1 oz gold coin has been available annually since 1967, while the fractional-ounce coins were introduced in 1980. The 2023 South African Krugerrand also features the more recent 1 oz silver coin, an option that has been available annually since 2018.

In the series, all coins are available individually in a plastic flip. The fractional-ounce gold coins are available in tubes when purchased in bulk, with the number of coins per tube varying by weight. The 1 oz silver coin comes with flips, tubes, and even mint-sealed boxes of 500 coins. While all of the coins are legal tender, only the silver bullion coin has an assigned face value.

History of the Series

The South African Krugerrand is arguably the most well-known coin in the world. Introduced in 1967, it would be another 13 years before any other sovereign mint had a competing bullion series. By the time that competition arrive, the Krugerrand accounted for 90% of the gold bullion market.

The designs used in this series are rooted in South African history. The portrait of Paul Kruger on the obverse comes from 1892 and was first used on the gold coins of the South African Pound. Kruger is so famous that his very name has been combined with the fiat currency of South Africa to form the name Krugerrand for the series. The reverse design of the Springbok was first used in 1947 on South African currency.

Add the Latest Krugerrand to Your Portfolio

2023 South African Krugerrands are now available to you at Provident Metals, and it’s the perfect time to add these coins to your portfolio. Please contact us with any questions at 800-313-3315, chat with us live online, or simply send us an email. You can also follow us on social media and read our weekly blog posts.