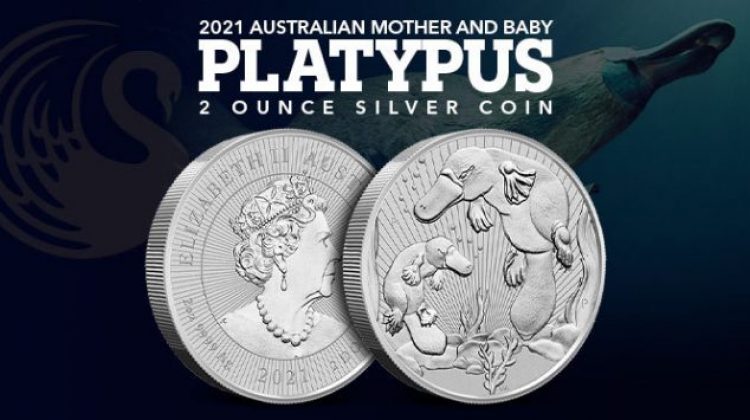 Whether the Perth Mint is issuing one-time commemorative coins or striking its popular annual collections like the Kookaburra, Koala, Kangaroo, and Emu, endemic wildlife from the Australian continent is always a focus of its designers. The Next Generation Series from the Perth Mint has been no different. Since its 2018 debut, the collection has featured native wildlife species that are easily associated with the Australian continent. In the fourth release, the mint keeps the focus on native wildlife with the image of a mother platypus and its young.

Platypus Design on the Reverse

The reverse design of the 2021 Australian Next Generation Platypus 2 oz Silver Coin features the image of a platypus mother with a young platypus by its side. The duo is shown underwater with radial lines through the background field and bubbles that help give the impression the two are actually underwater. Semi-aquatic mammals, the platypus is the only mammal in the world that lays eggs instead of giving birth to live young. Another unique aspect of the platypus is the spur on the hindfoot of the males that can deliver venom. Though it is not deadly, the venom does cause severe pain in humans. The only inscriptions on this side of the coin are the “P” mintmark of the Perth Mint and the “MR” initials of designer Monique Reeves.

Monarch Portrait on the Obverse

On the obverse side of 2021 Australian Next Generation Platypus Silver Coins, you will find the popular sixth-generation effigy of Queen Elizabeth II. Her Majesty features here in the latest portrait of the monarch to grace Australian coins. Notably, this is the first portrait of the Queen since 1966 to include her shoulders in the portrait. Wearing the George IV State Diadem Crown, the Queen is aged 89 years in this photo. The design element includes its own radial lines in the background in a pattern that differs from the reverse. There are also inscriptions of “Elizabeth II,” “Australia,” “2 oz 999 Ag,” “2021,” and “2 Dollars.”

Platypus Coining at the Perth Mint

The release of a platypus design in the Next Generation Series is hardly the first time this endemic Australian creature has been depicted on coinage from the Perth Mint. The first appearance of the platypus on Australian coins at the Perth Mint came in 2011 when it introduced the annual 1 oz platinum coin series with the image of a platypus on the reverse. In 2013, the creature was also depicted in the Australian Map-Shaped Series with a colorized image of the platypus.

Own the Newest Next Generation Series Coin Courtesy of Provident Metals

We encourage Provident Metals’ customers to contact us with any questions. You can call us on the phone at 800-313-3315, chat with us live online, or email us directly. As always, remember to follow us on Facebook and check-in each week with our new blog posts for greater insight on new releases.