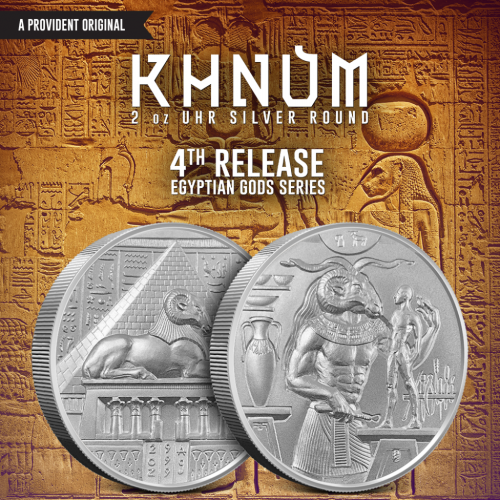 Thanks to popular demand, Provident has been working hard to bring you more designs in our Egyptian Gods series of 2 oz ultra high relief silver rounds. Following the release of Cleopatra, Anubis, and Sobek, we now bring you the fourth design—Khnum, the ram-headed god of the Nile River.

Khnum is the ancient Egyptian god of water, fertility, and procreation. He was also worshipped as a patron of potters and a protector of the dead.

Ancient Egyptian mythology tells of Khnum sculpting human children on a potter’s wheel from straw and clay found along the shores of the Nile River. He then imbued them with his soul—known as Ka—and became a creator of humankind. In the language of the ancient Egyptians, the words for “soul” and “ram” sounded alike, which explains why the ram is symbolic of Khnum.

The Egyptian gods and goddesses were depicted as human-animal hybrids, with human-like bodies and the heads of various animals. In similar fashion, Khnum inhabits the body of a man with the head of a ram. A pair of horizontal twisting horns adorn his head. These horns were also found on a species of ram that was once common in Egypt, but has since gone extinct. However, that same ram can be found on the reliefs of some of the early tombs of Pharaohs.

In some depictions, Khnum is drawn with green skin to symbolize new life and rebirth. It’s a reference to the regenerative attributes of nature.

We’ve had quite a few people inquire about the continuation of the Egyptian Gods series and we’ve received some great suggestions for other gods and goddesses to feature later. We hope you enjoy this brand-new Khnum round and that you continue to add to your Egyptian Gods collection!

Which Egyptian Gods round has been your favorite so far?