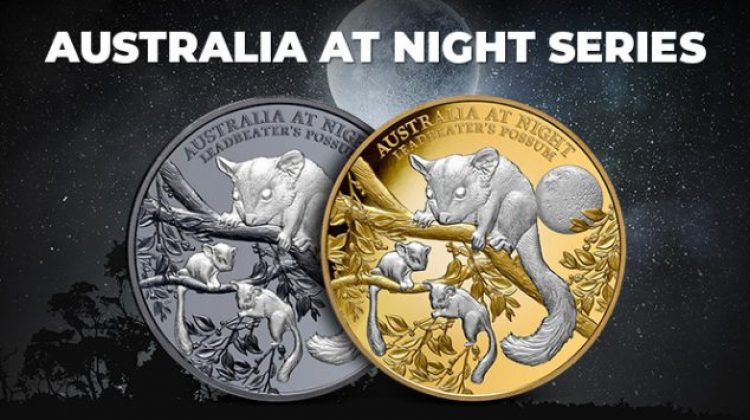 One of Australia’s most unique animal species is the Leadbeater’s possum, a species of non-gliding possums that is often referred to as one of the world’s most primitive remaining species. Australia at Night Series has previously featured five different animal species with distinct finishes on both 1 oz silver and 1 oz gold coins. The latest issue in this collection of Niue silver coins is available to collectors at Provident Metals.

In the obverse design of both coins in this release, you will find the image of Queen Elizabeth II. This iconic portrait is one of the longest-used effigies of the Queen throughout the course of her reign as the Queen of England. This design offers a right-profile relief that shows the Queen wearing the Girls of Great Britain and Ireland Tiara. Both coins have inscriptions of ELIZABETH II, NIUE, and 2022. The gold coin has additional inscriptions of 100 DOLLARS and 1 OZ 9999 GOLD, while the silver coin features ONE DOLLAR and 1 OZ 999 SILVER.

In Australia at Night Series, all coins issued in the collection come with a commemorative, wooden display box and a themed outer shipper. The gold coin comes with a Certificate of Authenticity as well. Both coins have limited mintage figures, with the silver coin set at 1,000 in total and the gold coin at just 150 in total.

The true beauty of this series is the finish to the two coins. The proof coins have frosted visuals with mirrored fields, but the impressive visuals don’t stop there. The silver coin comes with a black, frosted background field. Only the Moon and possums on the reverse, as well as the Queen’s portrait on the reverse, remain in a brilliant, lustrous silver. The gold coin is equally impressive with its frosted finish, gold background, and platinum plating on the aforementioned design elements on each side.

Often referred to as a primitive species, Leadbeater’s possum is the only species in the genus Gymnobelideus that remains in its ancestral form. In short, little evolution has taken place since this species evolved in its own right some 20 million years ago. Named for John Leadbeater, the taxidermist at the Museum Victoria that worked with the species first in 1867, Leadbeater’s possum is critically endangered as a species and exists in small pockets of the Central Highlands in Victoria, Australia.

Enhance Your Australia at Night Collection with the Leadbeater’s Possum

Leadbeater’s Possum joins the impressive list of animals to feature in Australia at Night Series. This collection of gold and silver coins has limited availability, so don’t wait to add this to your collection. Provident Metals’ customer service is available at 800-313-3315. We are also available to you online through our live chat and email address features. Remember to come check out our blog each week and follow us on Facebook for more information and details on product releases.