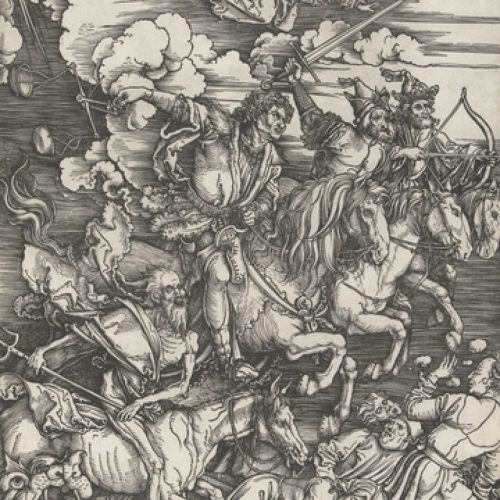 With the recent return of Game of Thrones, a lot of people are beginning to discuss the lore of George R.R. Martin’s universe again, along with a variety of other fantasy topics. But you don’t have to dive into the realm of modern fantasy for an interesting topic of discussion. Instead, you can rely on ancient theology and popular mythology. For this reason, many of our customers love our collector’s Four Horsemen of the Apocalypse 10 oz. silver bar.

You might have heard about the Four Horsemen of the Apocalypse once before in a Terry Pratchett book, a Metallica song, or in one of many video games, but you might be surprised to learn that their origins are within the New Testament. Described in the final book of the New Testament of the Bible, the Book of Revelation, the Four Horsemen are often seen as the harbingers of the Last Judgment—divine apocalypse—upon the human race. Some historians and theologians say that the book was a prophetic work signaling the end of the Holy Roman Empire, while others have used it to explain past World Wars and current social issues.


While interpretations of the Four Horsemen’s significance is wide-ranging, most researchers see each Horseman representing the eventual collapse of humanity: the White Horse of Conquest, as the righteousness that follows conquest and victory; the Red Horse of War, which represents the divisions sewn into the empire, perhaps through Civil War; the Black Horse of Famine, who stands as the symbol of imperial oppression against the masses while the rich exceed; and, finally, the Pale Horse of Death, the representative of the empire’s eventual destruction. While the Horse of Death is often referred to as “pale” in translations, the original color in Koine Greek was called khlōros, which appears more as a greenish-yellow pallid tone—one representative of death and decomposition.

The lore of the Four Horsemen is quite extensive, and it is one that can spur conversations that can last hours and hours, bringing about differing opinions as influenced by numerous religions and forms of popular media. It is for this reason that we are excited to offer this special silver bar. The Four Horsemen of the Apocalypse silver bar has a specific design that ought to catch the attention of any fellow precious metals collector. Furthermore, it is bound to impress any visitors you have, as its unique design is sure to catch the eye of a passerby.

The obverse of the silver bar features all four horsemen—the White Horse of Conquest, the Red Horse of War, the Black Horse of Famine, and the Pale Horse of Death—standing together atop the clouds. Each horseman is prepared, their weapons raised before them for whenever Judgment Day begins, ready to storm Earth and cleanse it of its impurity.


The reverse of the bar features a design similar to the Four Horsemen coin series we once ran, with a large shield emblazoned with the symbol of each of the Four Horsemen. Above the shield are the four horses themselves—the Horse of Conquest, War, Famine, and Death—who cradle the shield aloft. The bar’s reverse is also highlighted by a unique script that hallmarks this run of the bar, along with dotted symbols for the weapons wielded by the respective Four Horsemen—a bow, a sword, a balance (weighing scale), and a scythe.

The Four Horsemen of the Apocalypse silver bar will make a great gift for any mythology and/or theology loving friends and family; furthermore, it makes a great item to add to your precious metals collection, as it will stand out as a beautiful piece of art, one that will serve as a moral reminder to some, and one that will simply provide sheen for others.

If you have any interest in this item or any of our other Coin Series items, be sure to take a closer look. And, if you have any questions about the construction and design of the items, remember to reach out to one of our many Provident Metals team members!