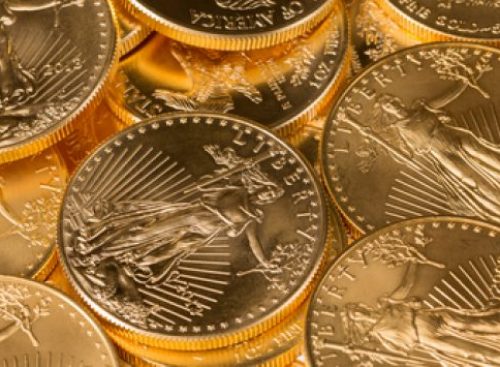 Are you someone who enjoys learning the rich history of U.S. Mint coins? Do you savor the opportunity to collect coins, whether for their rarity, commemorative releases, or sheer beauty? If so, you might be one of many avid coin collectors. But, whether you’re an amateur coin collector or an enthusiastic numismatist, you can find enjoyment from the various coins of American history. We’re most excited to offer attention to one of our favorite coins, the American Golden Eagle coins.

First minted in 1986, the American Golden Eagle coin has become one of the most sought-after coins released by the U.S. Mint in recent history. Authorized under the Gold Coin Bullion Act of 1985, these coins have since become one of the standard releases for American coins, particularly for their presentation of American liberty and freedom.

The American Golden Eagle coin has become one of the most appreciated American coins due to its design. The obverse side of the coin features a modern rendition of Augustus Saint-Gaudens’ presentation of Lady Liberty—hair flowing behind her, a torch held triumphantly in her right hand, and an olive branch lifted in her left hand. The reverse side, designed by sculptor Miley Busiek, features a family of bald eagles: the male eagle flies overhead, carrying an olive branch between its talons as it approaches a nest, which contains the female eagle and their hatchlings.

The Breakdown of Golden Eagle Coins

Golden Eagle coins are often listed by bullion dealers by the weight of the coin, solely because the term “eagle” was used to specify the denomination of pre-1933 ten dollar coins. Modern-day Golden Eagle coins come in four different denominations: 1/10 oz., ¼ oz., ½ oz., and 1 oz. Since they are printed by the U.S. Mint, these coins are certified, guaranteed by the government to have the exact weight of gold weight as listed. The particular interest these coins garner also comes from the fact that they are produced with 22-karat gold sourced from the U.S. 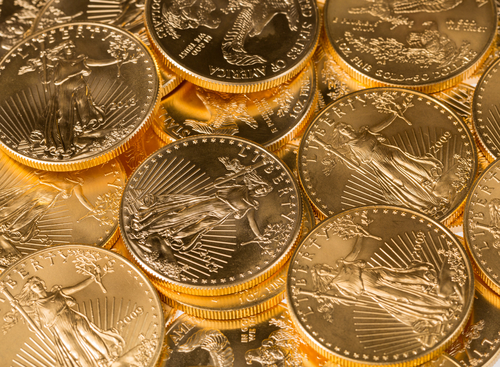 This 22-karat gold is especially interesting, because it was often used by the English, referred to as “crown gold.” The U.S. had not relied on crown gold since 1834—instead, reducing the usage of gold and cutting it with other metals—but American Golden Eagle coins were the first to see crown gold being used again in the U.S. At this time, the current concentration of Golden Eagle coins is as follows: 91.67% gold, 5.33% copper, and 3% silver. The coins are not made of pure gold, as cutting it with copper and silver helps the coins to be stronger and more durable to defend against the wear that comes with time and usage.

The Value of Golden Eagle Coins

While the coins have an inherent face value that can be used for monetary trade if needed, the true value of the coins is determined by the current spot price of gold. The coins thus have a notable monetary value, due to their fineness, making them worthwhile for investors. Furthermore, the coins are especially valuable for collectors, as, if they are properly secured and stored, they can be expected to garner more worth with time, especially when the circulation of that year’s mint begins to dwindle. 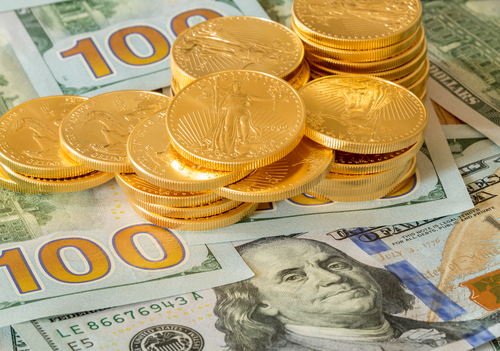 If you’re looking for something special, whether for your own collection or a coin-collecting friend or as a long-term investment, American Golden Eagle coins will make for a notable addition. If you have any questions about Golden Eagle coins or are interested in purchasing one of their denominations, unsure of which is right for you, Provident Metals is here to answer any of your precious metals questions!