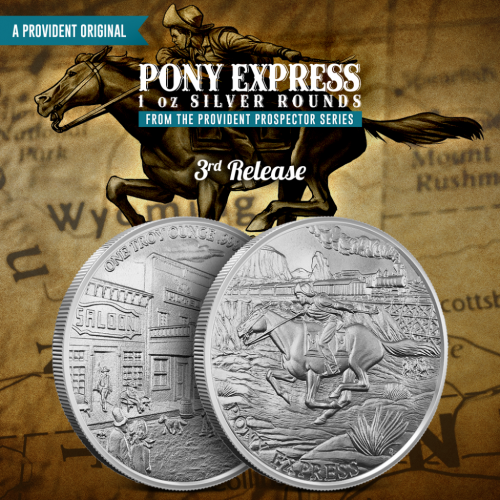 Because the Provident-exclusive Prospector design proved to be our top-selling silver round ever, we recently decided to form it into a series capturing the spirit of the Wild West. The Prospector was followed by the Gunslinger, and now we’re happy to announce the third design—the Pony Express!

On this round, you’ll see a young man riding a galloping horse across the rugged terrain in order to deliver the mail cross-country. The shared series reverse depicts a typical Western town during the time period, with a visible hotel and saloon.

History of the Pony Express

The Pony Express, though a short-lived enterprise, played an important role in American history. It all began in the mid-19th century when expanding Western settlement created a need for reliable mail delivery. This was originally handled by stagecoach companies and steamship routes, but those methods were slow and there was a growing need for the rapid transmission of information.

This demand led the to the creation of the Pony Express, an offshoot of the Central Overland California & Pike’s Peak Express Company. The Pony Express was a system of US mail delivery by means of continuous horse-and-rider relays between St. Joseph, Missouri and San Francisco, California. The full route was nearly 2,000 miles long and took 10 days to cover. Riders would generally travel 75 to 100 miles per day at a full gallop, changing horses every 10 to 15 miles. 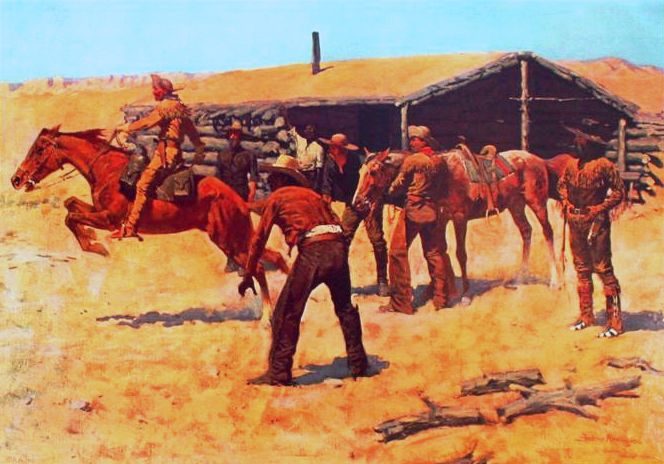 In order to accomplish this, the company established about 190 relay stations along the route. When riders arrived, they would remove the mochila—a special saddlebag with mail pouches—and throw it over the saddle of a fresh, rested horse. Then they’d be off again. These stations also provided a place for both riders and horses to rest and eat, though they were by no means luxurious and contained only the most basic accommodations.

The company had to acquire hundreds of top-quality horses and had to hire experienced riders, preferably those with a slight build in order to minimize the burden for the horses. Apart from executives, these riders earned the highest pay, often garnering two to three times what station keepers and general hands were paid.

Once established, the schedule had to be strictly followed by every rider—day and night, in all weather conditions. The primary goal was delivering mail on time. The Pony Express’ first ride was completed on April 3, 1860 by 40 riders and was widely reported by newspapers nationwide. The first mochila of mail contained a congratulatory letter from President James Buchanan to Californian Governor John Downey. It was the first time letters had been delivered over such a great distance in so little time.

Downfall of the Pony Express

The Pony Express ran for 18 months before reaching an end. Several factors led to this inevitable downfall. The parent company faced too many financial hardships and was unable to sufficiently recover. Native Americans were known to attack stations and burn them down, killing station keepers and horses. The public found sending mail via the Pony Express to be too expensive for regular use, limiting customers to primarily newspapers and businesses. But by far the biggest blow was developing technology. The introduction of the transcontinental telegraph line in October 1861, connecting the east and west coasts, led to the Pony Express announcing its closure just two days later. However, service continued into November to ensure all mail in the company’s possession was delivered.

During its operation, the Pony Express made a total of 308 runs that covered a distance of 616,000 miles—the equivalent of circling the earth over 30 times. A total of 34,753 letters were delivered, with only one mochila lost along the way. The system was very efficient and kept the country more connected than ever, right until its end. 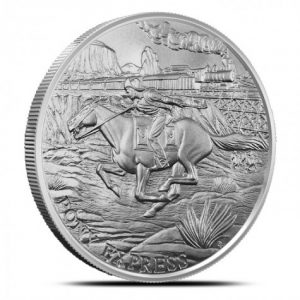 Our iconic Prospector round has become so popular that we recently decided to freshen the design and continue selling it in perpetuity. In addition, we turned it into a series of silver and copper rounds, each featuring scenes from the Wild West.

We plan to release four new designs each year. However, while the Prospector round will always be available, subsequent rounds will be made available for a limited time only. We also have plans for a 4-slot box featuring full-color series artwork for all you collectors out there.

Following the Prospector round, we released the Gunslinger and now we’re introducing the Pony Express. Will you be collecting this series?