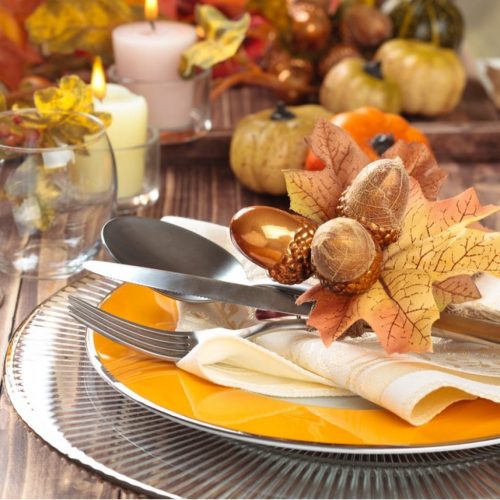 Thanksgiving is a time for family gatherings, which often means having to impress your mother-in-law or great aunt by throwing a flawless dinner party. Plenty of people take out their nice dinner plates and silverware to prepare for the occasion. But why do we call it silverware? Are utensils really made out of silver?

Though silverware has become more of a generic term to refer to any flatware—knives, forks, and spoons—these utensils were once made of real silver. Of the three main utensils, knives were created first out of flint or obsidian. Early humans used knives for hunting and cutting meat away from the bone. These primitive knives transitioned to bronze, iron, and finally, steel.

Spoons were initially made of wood or shells attached to wooden handles. Metal spoons were later developed for eating and carrying liquids using the same metal used to make knives of the era.

Two-tined forks were introduced in Roman kitchens, but did not become fashionable until the seventeenth century. Forks were later introduced to England in the early 1600s. These forks were made of iron, but the nobility used silver forks. Silver utensils (aka silverware) remained popular among royalty and the very wealthy until the nineteenth century.

By this time, competition among silverware manufacturers grew competitive and the price of silver bullion decreased. This allowed lower class consumers to buy silverware as well. However, the sale of real silverware has steadily declined since WWII. Meals have become less formal over the decades, and flatware made from stainless steel is much more affordable. Yet, some families still enjoy collecting and using utensils made from sterling silver. 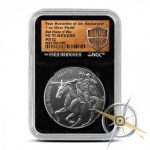 Whether you use true silverware or modern flatware made from steel, we hope you enjoy your holiday season! Enter our giveaway by telling us one thing that you’re thankful for this year. Commenting below will serve as your entry for our November giveaway. But remember to keep it classy; inappropriate comments will be deleted and disqualified. Submit your comment (one comment only please) by November 26, 2017. One winner will be randomly selected on November 27, 2017 to receive an NGC antiqued Red Horse of War round with a grade of MS70 from our Four Horsemen of the Apocalypse series.

Happy Thanksgiving to you and your family!