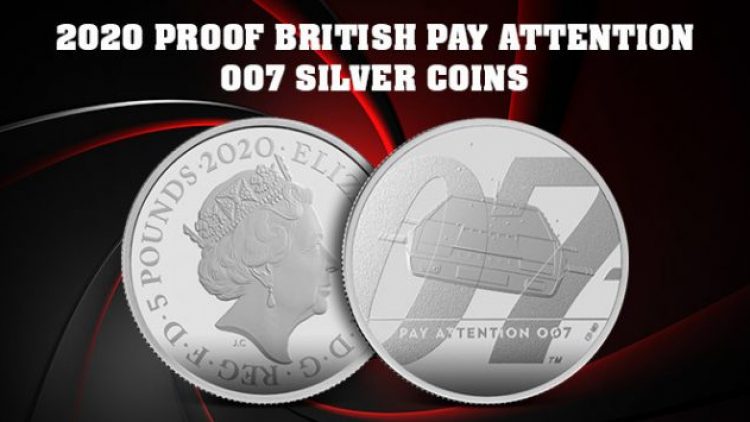 Since 1953, readers and moviegoers around the world have been enthralled with the suave demeanor and incredible skill of James Bond. British author Ian Fleming introduced the fictional character of James Bond to the masses in 1953, and the introduction of the first feature films in 1962 brought the character to an even wider audience globally. Over the past several decades, countless novels have been written by Fleming and other authorized writers, as well as 26 feature films in all. Eon Productions was responsible for 24 of these 26 existing films and is the production house behind the upcoming 25th feature film in its universe and 27th in total. As you read on below, you can learn more about the new silver British Pay Attention 007 release from the Royal Mint of England. 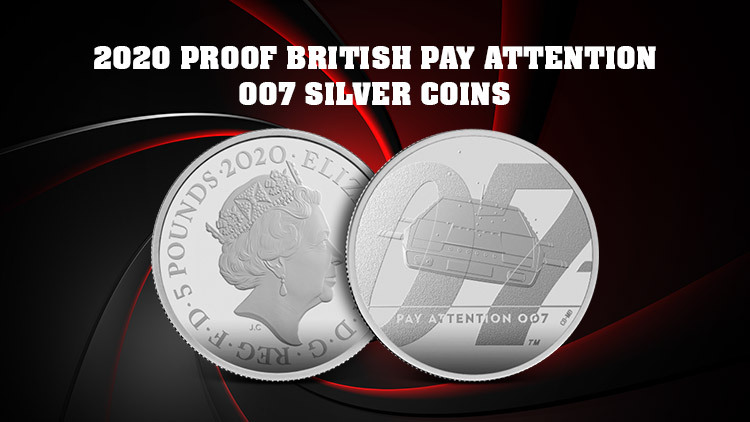 In the reverse design element of all coins in the Proof British Pay Attention 007 Silver Coin release, the design is the same. The Wet Nellie is depicted as the primary element on the reverse of the 2020 Proof British Pay Attention 007 1 oz Silver Coins. The Wet Nellie is a modified version of the Lotus Espiri, a popular sports car that was developed and released in Britain in the 1970s. The Wet Nellie is so-named because this modified version of the Lotus is for the exclusive use of James Bond on his missions. The Wet Nellie Lotus is capable of transforming from a hot roadster to a submarine capable of stealthily moving beneath the waves. The idea of the Wet Nellie actually moving beneath the water is enhanced by the angled placement of the Wet Nellie with telltale bubbles letting you know it is under the waves. Inscriptions on this face include a large “007” in the background, with “Pay Attention 007” in the lower field of the design.

On the obverse side of the 2020 Proof British Pay Attention 007 Silver Coins, you will find the effigy of Queen Elizabeth II. Created in 2015 by Jody Clark, the right-profile portrait of Her Majesty now in use on British coins is the fifth of her reign and shows her at the age of 89. In this particular design, the Queen is wearing the George IV State Diadem Crown on her head, a popular design element that previously featured on the third-generation British design from 1985 to 1997 as designed by Raphael Maklouf. The inscriptions on this side of the coin read “2020,” “Elizabeth II,” “D.G. Reg. F.D.,” and the face value of the respective weight in Pound sterling.

The Pay Attention 007 coin release from the Royal Mint of England comes with three proof options in its silver range. Additional coins not available from Provident Metals include a BU coin in a cupro-nickel finish, as well as two proof gold coins. As for the proof silver coins, you will find the following 2020 Proof British Pay Attention 007 Silver Coin options and mintages available:

The Royal Mint of England offers the 2020 Proof British Pay Attention 007 Silver Coins with presentation packaging befitting any collectible silver coin. The Pay Attention 007 Silver Coins ship in the same kind of packaging regardless of the weight option you purchase. All coins are housed inside of protective plastic capsules and set within a black presentation box with Royal Mint of England branding. The coins come with a Certificate of Authenticity from the mint as well. The coin, capsule, box, and COA all ship together inside of a silver, 007-themed Royal Mint shipping box.

For the 25th Eon film, Daniel Craig will portray Bond for the final time. Since 1962, seven men have portrayed James Bond in Eon Productions and outside feature films. With his final appearance as Bond in the upcoming film, Craig notches his fifth feature film portrayal of the famous British secret agent. That puts him second all-time behind Sean Connery and Roger Moore. Moore portrayed James Bond seven consecutive times in films released between 1973 and 1985 and is remembered for his legendary portrayals of the character.

Few could argue that Sean Connery remains the most iconic figure to fill the role of James Bond. Connery portrayed Bond seven times in total as well. He played Bond in the first five feature films, in six of the first seven, and in one of the two non-Eon Productions films released in the franchise. In fact, Connery is not only tied with Moore for seven appearances as Bond, but he is also the only man to portray Bond in and out of Eon Productions’ films and the only man to portray Bond across several decades at three in total (1960s, 1970s, 1980s).

Now is your chance to build on your James Bond collection of silver with the new Pay Attention 007 release from the Royal Mint of England. Provident Metals’ customer service is available to assist you with questions at 800-313-3315, online through our live chat, and via our email address. Remember to follow us on Facebook and keep up with our weekly blog posts.