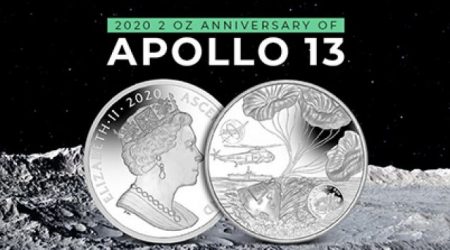 One year after celebrating a landmark achievement in 1969 with the success of Apollo 11, NASA celebrated a very different kind of success in 1970. As Apollo 13 made its way to the Moon for just the third landing of all-time on the celestial body, disaster struck and NASA was forced to improvise and rescue mankind from space for the first time in its history. To mark a different kind of 50th anniversary in 2020, the Pobjoy Mint released an ultra-high-relief silver coin with beautiful designs capturing the moment Apollo 13 safely returned to Earth with its astronauts in two. Learn all about this exciting new silver coin available through Provident Metals. 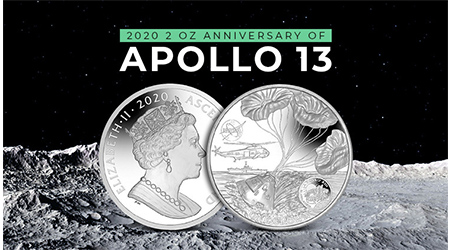 On the reverse field of the 2020 50th Anniversary of Apollo 13 2 oz Silver Coins is a depiction of the safe splashdown of NASA astronauts in the South Pacific. The command module is shown in the foreground as its parachutes soften its descent into the South Pacific Ocean. As the module breaks the surface of the water and sends out waves, a recovery helicopter dispatched from the USS Iwo Jima, an amphibious assault ship shown in the distance is hovering nearby to recover the astronauts. The Apollo 13 mission patch is in the lower-right field and the NASA logo is in the upper-left field just above the recovery helicopter. The lone inscription on this face of the coin reads “One Crown” below the image of the command module.

The obverse face of 2020 50th Anniversary of Apollo 13 2 oz Silver Coins features an effigy of Queen Elizabeth II. Her Majesty is shown in right-profile relief in this exclusive Pobjoy Mint portrait. Wearing Royal earrings and a necklace, the Queen is shown in this bust with the George IV State Diadem Crown on her head. Part of the official Crown Jewels of England, the George IV State Diadem Crown was commissioned during the first year of King George IV’s reign as King of England. The crown is among the most beautiful in the Crown Jewels with a total of 1,333 diamonds in its setting that weigh more than 300 karats in total. Inscriptions on this side read “Elizabeth II,” “2020,” and “Ascension Island.”

The Pobjoy Mint issues the 2020 50th Anniversary of Apollo 13 2 oz Silver Coins with maximum mintages and presentation packaging. The coins are limited in total to just 650 silver coins, each one individually packaged inside of a presentation box. The black presentation box from the Pobjoy Mint has a black-velvet lining to hold the coin and a white interior lid with the name and logo of the mint. Each one of the coins also comes with its own Certificate of Authenticity bearing imagery and themes from Apollo 13.

Apollo 13 was the seventh crewed mission in the Apollo space program at NASA. Launched less than a year after the success of Apollo 11 reaching the Moon for the first time in July 1969, Apollo 13 was meant to be the third mission in the Apollo program to visit the Moon. However, a debilitating failure struck the Apollo 13 service module just two days into the mission. As part of a routine stir of the oxygen tanks, a faulty wire caused an explosion that, instead of stirring the oxygen inside, vented the oxygen within out into space.

The harrowing experience captivated the nation with the Apollo program. NASA had the spacecraft use the gravitational pull of the Moon to slingshot around the dark side of the moon to generate momentum back toward Earth without wasting power. On April 17, 1970, the command module successfully returned to Earth with all three men alive and well.

Now’s your chance to own the Apollo 13 silver coin to celebrate 50 years since the return of the craft and crew to Earth. Please feel free to reach out to Provident Metals with any questions. You can call us at 800-313-3315, online using our live chat, and through our email address. You can also follow us on Facebook and read our weekly blog posts for more in-depth insight on upcoming releases.