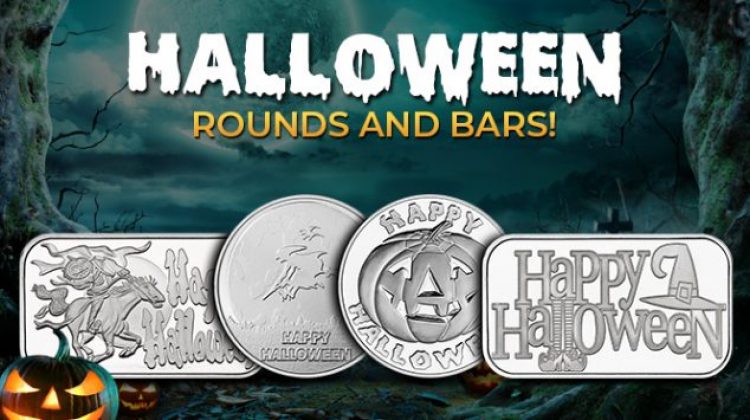 When it comes to buying themed silver bullion, some of the most enjoyable pieces to collect are those associated with major holidays on the calendar. Halloween-themed silver has become one of the most popular in this genre, with fun, festive designs celebrating the season that capture images of the most common symbols of the season. These include carved pumpkins, witches, and even a new Headless Horseman option. Provident Metals’ collection of 2020 Halloween Silver is now in stock and available for presale, so take a moment to learn a bit more about each release and design.

There are no two symbols more closely associated with the Halloween season than the pumpkin and the witch. Neither one is directly associated with ancient festivals that predate Halloween, but rather, were adopted as part of the celebration of All Hallows’ Eve in the centuries after pagan and Celtic festivals were merged with Christian religious celebrations of the season. Today, carved pumpkins are a staple of Halloween décor and witches represent one of the most popular costumes of the season.

The obverse of the 1 oz Silver Happy Halloween Pumpkin Round features a carved Jack-o-Lantern. As with many carved pumpkins, this Jack-o-Lantern has triangular eyes and a triangle nose, with a happy smile on its face. There is ghoulish-looking text that wishes you a “Happy Halloween.” The name Jack-o-Lantern comes from English folklore that speaks of strange lights emanating from bogs. This light was known as “will-o-the-wisps.” The earliest use of the term dates to the 1660s in the eastern counties of England. A wisp was a bundle of sticks or paper lit as a torch, with the proper name Will included to personify a person holding such a torch. Over time, this literary construction passed down to carved out gourds and pumpkins as Jack-o-Lantern, or Jack of the lantern.

On the obverse of 1 oz Silver Happy Halloween Witch Rounds, we find a common depiction of what many fear in Halloween tales: witches flying at night. In this design, the Moon is the largest figure as it dominates the night sky in the background. The Moon rises behind a dense forest as witches ride on their brooms, passing in front of the Moon on their way to cause mischief on All Hallows’ Eve. American history holds one of the most famous witch events in global history: the Salem witch trials. The trials took place in Salem, Massachusetts, where the Puritan settlers believed the village to be cursed with witches. Though modern scholars have found countless other explanations for the events that took place during the witch trials, the Puritans of that age truly believed, in many cases, that some of the town’s women were cursed by the devil and carrying out his will as witches in the human world.

Both silver rounds come with a blank reverse design field. While the central field remains blank to allow for custom engraving, the design rim has an ornate border element with inscriptions of the weight, purity, and metal content. These rounds are available individually in flips, in acrylic tubes of 20, or boxes of 500.

In addition to 1 oz silver rounds, Provident Metals has two 1 oz silver bars from SilverTowne with more distinctive options for Halloween collectibles. Each one has its own flair, with a festive witch design on one and the Headless Horseman from Washington Irving’s classic American folktale on the other.

For the obverse side of 1 oz Silver Happy Halloween Headless Horseman Bars, a headless figure rides furiously on horseback against a moonlit sky with a carved Jack-o-Lantern in his right hand. There is an inscription on this face of “Happy Halloween.” There are countless written tales of a headless horseman dating back to the Middle Ages, with most of these stories coming from the British Isles. In England, for example, there is the story of Gawain slaying a Green Knight by decapitation. The beheaded Green Knight proceeds to pick up his own head and ride away from the battle, challenging Gawain to meet him again on the same date, one year later. Most American audiences know the headless horseman from Washington Irving’s “The Legend of Sleepy Hollow.” In his 1820 tale, the horseman was a Hessian fighting for England at the Battle of White Plains in 1776. He is decapitated in the battle and quickly buried, without his head, by his retreating comrades. He is said to rise from his grave at the cemetery of the Old Dutch Church of Sleepy Hollow to seek out his missing head while wielding a Jack-o-Lantern in his hand. Modern retellings associated the horseman’s rise with Halloween as the Battle of White Plains took place around that time of year in 1776.

In the obverse design of the 1 oz Silver Happy Halloween Witch Bar, you will find a more jovial and festive Halloween design. The common elements of a witch costume feature on this side, with a large, pointed witch hat and the legs of a witch, complete with striped socks and buckle shoes, prominent in the design element. The inscription of “Happy Halloween” uses the witch’s legs to form the “L”s.

Halloween is celebrated annually through the Western Christian world on what is known as All Hallows’ Eve, the night before All Hallows’ Day. The religious festival is a three-day celebration marking a period of time to remember the dead, particularly saints and martyrs, but also dearly departed family and friends. Modern celebrates of Halloween have become a jovial occasion consisting of costume parties and trick-or-treating.

Get Your Halloween Silver Now at Provident Metals

Provident Metals currently has new Halloween Silver items on presale, and once supplies are exhausted, you will not find these designs available again this year. If you have any questions, don’t hesitate to ask. You can call us at 800-313-3315, connect with us via our live chat, or simply email us. Don’t forget to follow our Facebook page and catch our weekly blog posts for insight on upcoming and new releases.