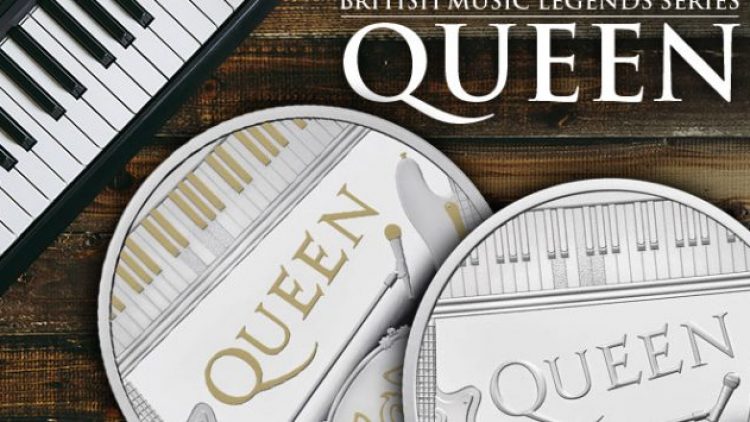 Queen is one of the most popular rock bands of all-time, and if you’ve ever attended a sporting event you have no doubt heard some of the greatest hits written and performed by Queen. Formed in 1970, the group dominated international rock music from the early 1970s until the mid-1980s when lead vocalist Freddie Mercury had to retire due to health reasons. The Royal Mint of England honors the legacy of Queen with a design that debuts the new Music Legends Series. Though many coins are available, Provident Metals focuses its offering on the proof 1 oz and 1/2 oz silver coins. Learn all about the first release in this exciting new series now!

On the obverse of these 2020 Proof British Music Legends Queen Silver Coins, you will find the fifth-generation effigy of Queen Elizabeth II. Over the course of her long reign, Queen Elizabeth II has had her effigy updated to reflect her age on the throne. This design was created in July 2015 by Jody Clark and features the Queen in right-profile relief at the age of 89. She is wearing the George IV State Diadem Crown that alters a cross with the combined flowers of England, Scotland, and Ireland together: the rose, thistle, and shamrock. The background field of both coins features a clear, mirrored field with inscriptions of “2020,” “Elizabeth II,” “D.G. Reg F.D.” The face value is inscribed on both sides as “2 Pounds” for the 1 oz coin and “1 Pound” on the 1/2 oz silver coin.

The reverse face of 2020 Proof British Music Legends Queen Silver Coins boasts musical instruments used by the four members of Queen. Brian May and John Deacon played guitar for the group, represented on either side of the drums played by Roger Taylor in this design element. Freddie Mercury was the lead vocalist and pianist for the group and is represented by the microphone and keyboard in the remainder of the design. There is an important distinction to notice between the two silver coins.

The Proof British Music Legends Queen 1 oz Silver Coin in this release is unique in the use of gold colorization elements on select facets of the reverse design field. Also unique to the 1 oz coin in the release is the edge-lettering on the coin. Here, you will find the last names of “Taylor, May, Mercury, and Deacon.” The 1/2 oz silver coin has a reeded edge and no colorization added to its design elements.

Both of the coins available in the 2020 Proof British Music Legends Queen release come with presentation packaging and a Certificate of Authenticity. The 1 oz coin is packaged inside of a black display box and has a mintage of only 7,500 coins. The 1/2 oz coin, meanwhile, is available with a clear acrylic case and has a maximum mintage of 17,500 coins.

Queen was formed in 1970 when Freddie Mercury joined Brian May and Roger Taylor. The latter two had already been performing together as Smile, but Mercury was a huge fan of the group who encouraged them to dabble in new, more elaborate staging and recording techniques. Deacon was recruited to join the group in 1971. Two years later, their debut album was released. Between 1974 and 1981, Queen released a number of albums and singles that would generate success for the group, not only in the United Kingdom but internationally. Hits like “We Will Rock You,” “We Are The Champions,” and “Another One Bites the Dust” have become must-play songs at sporting events.

By the mid-1980s, Queen was the most popular stadium rock band in the world. In 1986, Queen’s run as a four-man group came to an end when Mercury performed with the group for the final time. He retired later that year and would die in 1991 from bronchopneumonia, a complication of AIDS. Deacon later retired from the group in 1997, but May and Taylor still perform in a group that is often known as Queen-plus. Since 2004, May and Taylor have routinely toured with Paul Rodgers and Adam Lambert joining as vocalists.

The Proof British Music Legends Queen 1 oz and 1/2 oz silver coins are now available for presale with Provident Metals. Once the coins arrive on or around March 11, 2020, orders containing these coins can ship. You don’t have to wait until March 11th to make your purchase though. Take advantage of the presale and ensure you receive one of these unique Queen coins. You can reach out to us at 800-313-3315 with questions or connect with us online through our live chat and email address features. Make sure you make a point to read our weekly blog so you know what is coming next to our online catalog. You can also follow us on Facebook for updates on social media as well.