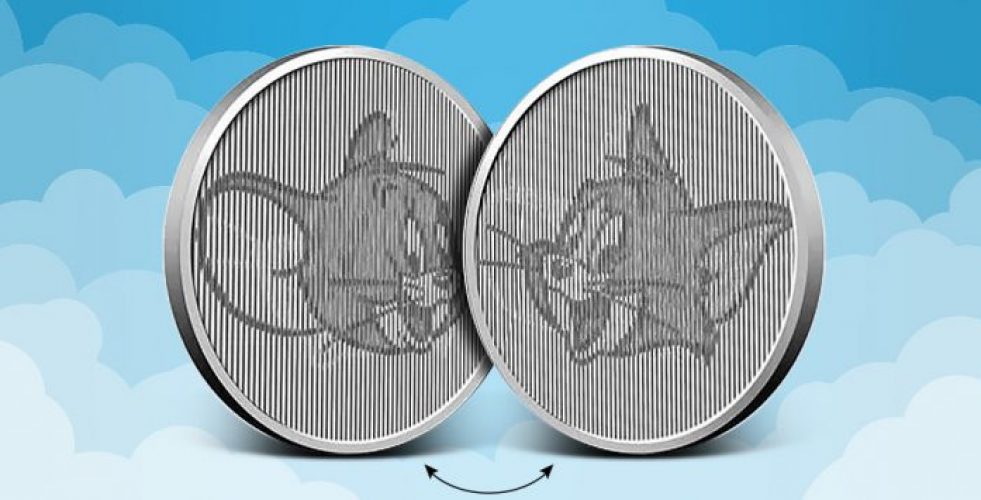 One of America’s favorite cartoon duos of all time is the cat-and-mouse team of Tom and Jerry. The whimsical mouse, Jerry, and the household guardian cat, Tom, have been battling it out on the small screen and the big screen for more than 80 years now. To honor this long-standing partnership and the comedic relief it has provided, the Royal Dutch Mint offers a commemorative 1 oz silver round design that is truly one-of-a-kind. Learn all about the new 1 oz Silver Tom & Jerry 80th Anniversary Round available from Provident Metals.

On the obverse side of the Silver Tom & Jerry 80th Anniversary Round, you will find a distinctive Lenticular design. This side of the round features both the face of Tom and Jerry, but never at the same time. As you adjust your viewing angle or rotate the round in your hand, the visual field changes to show either the right-profile face of a smiling Jerry or the left-profile relief of a smiling Tom.

In the reverse design of 1 oz Silver Tom & Jerry Rounds, the Royal Dutch Mint offers a commemorative visual element celebrating 80 years of hijinks between Tom and Jerry. This design element shows a large 80 in the center that has a frosted finish with a mirrored reflection of the numbers. The famous Tom & Jerry series logo features at the top of the design, with the silhouettes of Tom and Jerry chasing one another through the letters in the center of the design. The field includes additional inscriptions of 1 OZ FINE SILVER, .999, and the word YEARS below the number. The copyright and trademark information also features on this side of the silver rounds.

In 1940, the first animated Tom & Jerry comedy shorts were released through Metro-Goldwyn-Mayer, with William Hanna and Joseph Barbera behind the creation of the series. The original run for the franchise included 114 short films issued by MGM between 1940 and 1958. The last releases in 1958 came after MGM closed its cartoon studio in 1957. The Tom & Jerry franchise saw a number of revivals in the coming decades.

Among the many revivals of this series were new animated shorts released from 1961-1962, 1963-1967, a television series from 1975-1977 that brought back Hanna and Barbera, and various other offshoots. The most recent was the Warner Bros. era of production that started in 2006 and continues to this day. In 2021, a live-action feature film was released in the United States that brought Tom & Jerry to the big screen.

Now is the time to act if you want to own a piece of Tom & Jerry history. Please feel free to reach out to Provident Metals if you have any questions. You can call us on the phone at 800-313-3315, chat with us live online, or simply send us an email with your inquiries. We encourage you to follow us on Facebook for regular posts and updates, and as always, read our weekly blog posts for more information on new products coming to our lineup.