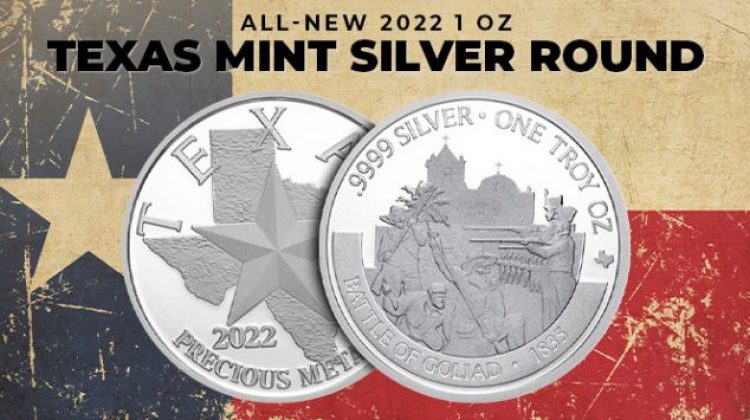 From October 1835 to April 1836, Tejanos and American colonists living in Texas pushed back against the new centralized government of the Mexican Republic. From the opening shots fired at Gonzales to the Battle of San Jacinto, the Texas Revolution can be relived in the designs of the 1 oz silver rounds in the Texas Mint Silver Round Series. Introduced in 2010, The Texas Silver Rounds have been available with the same designs on the obverse and reverse, for most years at least. In 2020, the mint introduced a design series within the collection honoring the Texas Revolution.

Since the 2010 introduction of the Silver Texas Round Series, the mint has featured the same design element on the obverse of the rounds. The design on this face of the round offers a textured depiction of the boundaries of the Great State of Texas. On the obverse design field, you will also find the large Lone Star of Texas imposed over the outline of the state. Inscriptions on this field of the round include TEXAS PRECIOUS METALS and 2022.

One of the biggest campaigns of the Texas Revolution features as the design on the reverse of 1 oz Silver 2022 Texas Rounds. In the third and penultimate design of the series, the Texas Mint offers a depiction of the battle at Fort Defiance during the Goliad Campaign. Here, the forces of the Mexican Army lineup to fire upon the Texian defenders at Fort Defiance. The inscriptions on this face of the round read .9999 SILVER, ONE TROY OZ, BATTLE OF GOLIAD, 1835, and a small outline of the state of Texas.

The history of the Texas Revolution starts with the centralization of Mexican governmental power under President Antonio Lopez de Santa Anna. At this point in time, Texas was a region of the Mexican Republic and the Tejanos living there, as well as the handful of American colonists who had moved into the region, were in favor of federalism. With their representation lost in the new, centralized Mexican government, Tejanos sought freedom.

In the Texas Revolution Series, the Texas Mint offers designs on the reverse honoring the brave Texians and their fight for freedom. From Gonzales to the Alamo and Goliad to San Jacinto, the Texians fought bravely to establish the Republic of Texas. While the Battle of Goliad ended with the Mexican Army massacring the surrendering Texians, this move enraged the people of Texas and helped swell the ranks of the Texian Army. Just weeks later, at the Battle of San Jacinto, the Texians would definitively defeat the Mexican Army and capture President Santa Anna. For the next decade, the Republic of Texas existed as an independent nation before joining the United States of America through annexation in 1846, an event that would lead to renewed conflict between Texans and Mexico during the broader Mexican-American War.

Keep Your Collection Going with the Silver 2022 Texas Round

With just one design left to come in the Texas Revolution Series within the Texas Round collection, now is your chance to purchase the 1 oz Silver 2022 Texas Round. If you have any questions, Provident Metals is here to assist you at 800-313-3315. Additionally, you can follow