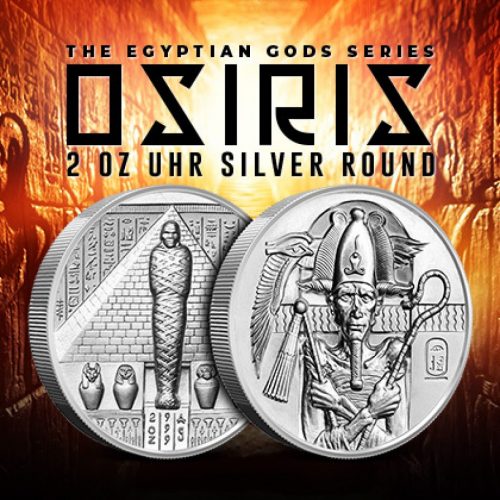 The silver rounds in the Egyptian Gods Series provided fans of Egyptian mythology with complex, detailed images depicting some of the major gods of Ancient Egypt. Each release in the collection offered a design struck in ultra-high relief, generating a design element that has greater 3D relief and almost appears as though it is a small statue upon the surface of the silver round. The background field comes with greater visual depth as a result of the ultra-high-relief strike as well. After its original four-design release, the Egyptian Gods Series hit the pause button. Now, though, the series makes its return with an impressive Osiris Zombie design. For more details on the newest release in the series, and the future of the collection, read on to learn what is ahead.

With the resumption of the Egyptian Gods Series, a new obverse design leads off the collection with the undead image of Osiris. On the obverse side of the 2 oz Silver Egyptian Gods Osiris Round, you will find the Osiris image. Egyptian mythology states that Osiris was murdered and dismembered by his brother. His wife, Isis, collected his remains and wrapped him in mummification gauze to perform a ceremony to bring him back to life. Though it last for just one day, Osiris and Isis were able to conceive a son who would go on to become the pharaoh of Egypt. His body, as shown here, is wrapped only to the chest in gauze. He has the pharaoh’s beard, the Atef crown on his head, the crook and flail in his hands, and has a bony, dead appearance. Were this a colorized design, he would likely be depicted with the green skin commonly found in Ancient Egyptian artwork.

The symbols associated with Osiris in this design are important. You will notice, for one, that his cartouche from Egyptian hieroglyphs is featured in the lower-right field and includes within it a mummified pharaoh and eye of Horus. The Atef crown on his head is a symbol of the kings as it combines the white crown of Upper Egypt with ostrich feathers. The crook was a symbol of kingship in Ancient Egypt, while the flail stood for the fertility of the land.

In the reverse design of the new 2 oz Silver Osiris Round, you will notice his figure is now completely mummified. After returning to life for one day, Osiris again passed on to the afterlife. He was properly mummified afterward and became closely associated with death and the afterlife in the centuries to come. His mummified body is depicted upright in front of a pyramid tomb. The background field offers a wall of hieroglyphs. To the sides of Osiris, you will notice clay pots that likely hold his vital organs that were removed during the mummification process for preservation. At the bottom, there is an inscription in the ancient text of “2 oz 999 Ag.”

With the return of the Egyptian Gods Series, the new Osiris Zombie issue comes with two versions of the round. The new design is available in a Brilliant Uncirculated release, as well as an Antique release. The Antique Silver Round has a distinctive polish that uses matte visuals to create the appearance of an ancient coin. In addition to these options brand-new from the mint, you will also find the Osiris Zombie design available in both versions with certifications from the NGC. Provident Metals will have perfect and near-perfect silver rounds available from this release with the following grades:

When the Egyptian Gods Series was originally released, the four initial designs were created by Heidi Wastweet. Ms. Wastweet has an impressive professional career in coin, medal, and round design. Outside of her work on the Egyptian Gods Series, she served as the Chief Engraver of the Sunshine Mint for 11 years, and later as the lead designer of the Global Mint. She currently serves as President of the American Medallic Sculpture Association, is a member of The International Art Medal Federation, and is an elected member of the National Sculpture Society, and is also a member of the Artistic Infusion Program at the United States Mint. Over the course of her career, she has developed some 1,000 coin and medal designs, with examples of her medal work held in the Smithsonian, the British Museum, and even the Vatican.

The Egyptian Gods Series returns with not one, but three new designs in total. After the release of the Osiris Zombie design, upcoming imagery will appear in this collection for Bastet, in the form of a Lioness, and Ra, in the form of a falcon.

Osiris is said to have been one of the original kings of Egypt and was beloved by the people. In death, he was raised to the position of a god. Considered one of the Nine Gods, his many associations included being the god of life, death, the afterlife, and the fertility of the land. His most significant role was as god of the underworld. In this role, he was the very last deity to pass judgment on the dead.

Build Upon Your Egyptian Gods Series at Provident Metals

Now’s the time to build your Egyptian Gods collection even further with the new Osiris Zombie design. You can direct your questions to Provident Metals’ customer service at 800-313-3315. We are also available to assist you on the web through our live chat and email address features. Don’t forget to read our weekly blog posts and follow us on Facebook for more detailed information and chances to win metals in our weekly spot price contests.