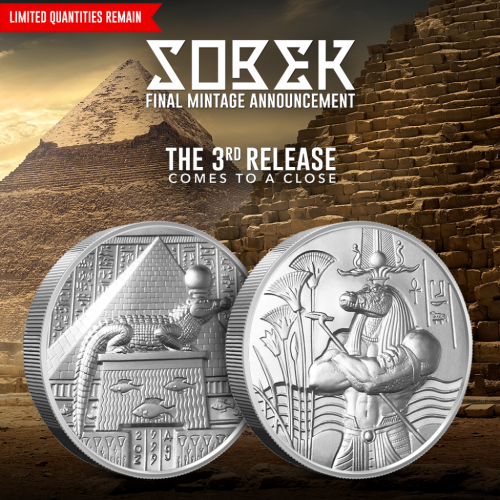 Thanks to you, our Egyptian Gods series of 2 oz ultra high relief silver rounds has grown quite popular since the release of Cleopatra in 2015. She was followed with the release of Anubis and Sobek, and most recently, Khnum.

With Khnum now available, we have stopped production on Sobek in order to honor our promise of a limited mintage series. This ensures that the series maintains its collectors’ value, which is reflected in the secondary market since Cleopatra and Anubis rounds are selling for $80+ each.

Once the remaining inventory of Sobek rounds sells, they will no longer be available in new condition. During the run of the crocodile god Sobek, we produced 12,500 rounds and we currently have just over 2,000 remaining. So if you’d like to add Sobek to your collection, we recommend you act soon before supplies permanently run out.

Who is Sobek? In case you’re late to this series, Sobek is known as “Lord of the Waters” and represented strength, power, and fertility in ancient Egypt. He was a chaotic god, yet was also believed to be a force of creation.

Along with Sobek, Egyptians worshipped actual crocodiles as the earthly embodiments of the god. In fact, mummified crocodiles have been discovered in ancient tombs, likely put there to protect human remains.

Each round in the Egyptian Gods series is designed to tell the story of the featured god or goddess. It’s a trait that has been continued with Khnum, which shows the ram-headed god sculpting mankind from clay found on the shores of the Nile River.

Which of these four designs has been your favorite so far? Let us know in the comments section below, and then grab your Sobek round while supplies last!