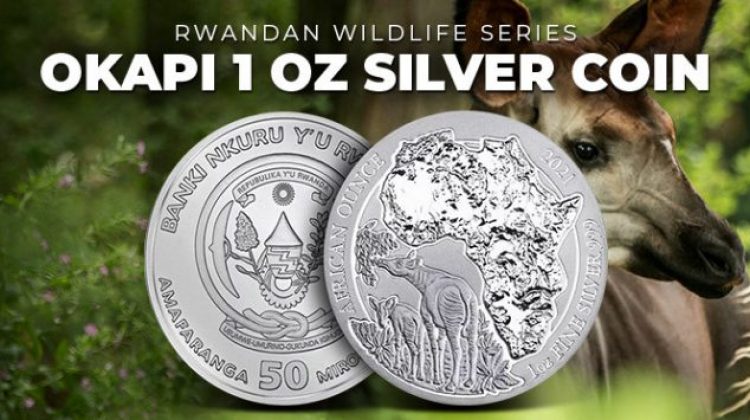 The African continent was once represented by the Somali Republic and the African Wildlife Series as the only major bullion series from the continent. In recent years, private mints around the globe have expanded the variety of Foreign Silver Coins available from African nations such as Chad, the Congo, and the Democratic Republic of Congo. Now, one of the best-represented nations is Rwanda. Its coin collections have grown to feature the African Lunar Ounce, the African Nautical Ounce, and the Rwandan Wildlife African Ounce Series. For the 14th release of the series in 2021, the okapi features as the native species represented in the collection.

On the reverse side of the 2021 Rwandan Okapi 1 oz Silver Coin, you will find a new design element in the lower-left field of the coin. The African continent’s topographical map is featured in the center of the design field, a feature that is found on all 13 previous issues of the Rwandan Wildlife Series coins. The lower field is where each new animal is depicted. The okapi design features a pairing of a young okapi and its parent near a tree as the adult okapi reaches up to the low-hanging branches to dine on leaves. Inscriptions on this face of the coin include “African Ounce,” “2021,” and “1 oz Fine Silver 999.”

In the obverse design of 2021 Proof Rwandan Okapi Silver Coins, the BH Mayer Mint features the national coat of arms for the Republic of Rwanda. The coat of arms has various designs celebrating the culture of indigenous peoples within the country. At the center of the design is a traditional pot, with designs flanking it that include branches of coffee and sorghum and the traditional shields of indigenous warriors. All of this is surrounded by a rope tied in a knot at the bottom. There are ribbon banners above and below the designs that read “Republika Y’u Rwanda” and “Ubumwe-Umurimo-Gukunda-Igihugu.” Other inscriptions on this side of the coin read “Banki Nkuru Y’u Rwanda,” Amafaranga Mirongo Itanu,” and “50.”

Details of the 2021 Okapi Release

As with all other issues in the Rwandan Wildlife Series, the BH Mayer Mint produces 1 oz silver coins in a Brilliant Uncirculated and Proof version. The BU silver coins come inside of individually-sealed plastic or sealed sheets of 10 coins. The individual options are separated from the original 10-coin sheets. The proof versions of the coin are packaged individually with acrylic capsules and come with a Certificate of Authenticity from the mint. Each proof coin has unique visuals that include contrasting designs with a frosted finish and a background field that is mirror-like. All of the coins have 1 Troy oz of .999 pure silver and a face value of 50 Rwandan Francs backed by the National Bank of Rwanda.

What is the Okapi?

Known by names such as the Congolese giraffe, forest giraffe, and zebra giraffe, the okapi is a distinctive species unique to the African continent. One of two members of the Giraffidae family, along with the giraffe, the okapi looks like a smaller version of the giraffe crossed with a zebra. The body structure of the okapi is similar to that of a giraffe and both feast on leaves from trees, though the okapi only stands around 4.9 feet at the shoulders. The hindquarters of the okapi have stripes similar to that of the zebra, hence its nickname as the zebra giraffe. The okapi is typically found in central Africa in the northeastern regions of the Democratic Republic of Congo.

Established in 1871, Bernard Henrix Mayer founded the German mint as a family-operated facility. To this day, the mint remains a family-owned and family-operated mint that has grown to become one of the precious metals industries greatest companies.

Get Your 2021 Okapi from Provident Metals

The newest coin from the Rwandan Wildlife Series is now available at Provident Metals. We encourage Provident Metals’ customers to call us at 800-313-3315 with questions. You can also chat with us live online or simply send us an email with your inquiries. Our social media page and blog are a great way to stay ahead of the curve on our upcoming and new releases, with in-depth information available each week on our blog.