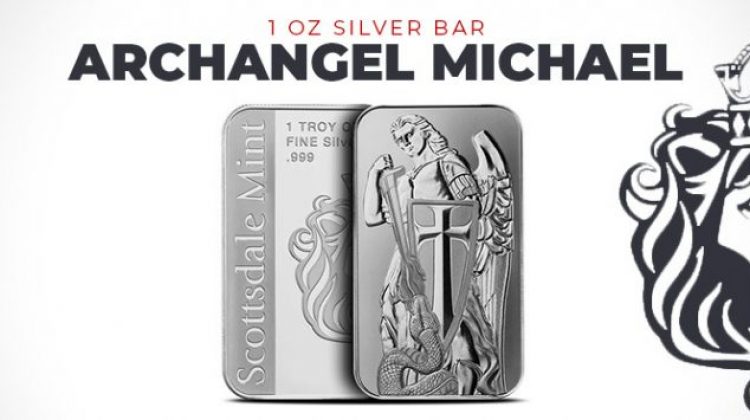 One of the leading depictions of the Archangel Michael comes from the silver and gold bullion series of coins from the National Bank of Ukraine. Now, the Scottsdale Mint offers a brand-new interpretation of the powerful archangel in a silver bullion bar series. These new 1 oz silver bars bring the exceptional design concepts that only minted ingots can offer. Now is your chance to learn about the new Archangel Michael Bar from the Scottsdale Mint.

The obverse side of 1 oz Silver Archangel Michael Bars is a depiction of the heroic archangel. The reported leader of God’s armies in the battle against Satan, Michael is the most powerful of the angels in Heaven. In this powerful design, he is cast in a strong pose while driving his sword into the serpent beast at the base of the design element. Michael looks into the distance as he vanquishes his foe. His powerful wings are depicted and he carries a large, spade-shaped shield to defend himself.

On the reverse field of Silver Archangel Michael Bars, you will find simple engravings that reflect the identifying hallmarks of the bar. The most prominent strike is the Scottsdale Mint logo. Along the right side of the bar, you will find half of the face of the crowned lion of the mint logo. The top of the design field has inscriptions of 1 TROY OZ FINE SILVER .999. The left side of the bar’s design element features the SCOTTSDALE MINT name.

With the release of the 1 oz Silver Archangel Michael Bar, the Scottsdale Mint has issued a silver bullion ingot with beautiful designs. The bars are available to investors with individual acrylic capsules when purchased in multiples under five. Multiples of five silver bars will arrive sealed together in a board by Scottsdale Mint. You can also purchase multiples of 250 silver bars in a box.

Background on the Archangel Michael

The Archangel Michael is the most powerful angel from the stories of the Bible. He is one of God’s most trusted angels and leads his armies during the war. When Satan and the fallen angels launch a war against God in Heaven, it is Michael who steps to the forefront to lead the armies of God. The design on these silver bars is reflective of the biblical tales of Michael’s success. When Michael slays a dragon or serpent in battle, it is reflective of his defeat of Satan and the forces of evil.

Michael is not only one of the most powerful angels from the Bible, but he is also one of the most prominent among the major world religions. In fact, he is the only archangel mentioned in the Hebrew Bible, Christian Bible, and the Holy Book of Islam.

The new-minted ingots from the Scottsdale Mint in the Archangel Michael Series represent an exciting new release from the mint. Please feel free to reach out to Provident Metals if you have any questions about these silver bars. You can call us on the phone at 800-313-3315, chat with us live online, or simply send us an email with your inquiries. Don’t forget to follow Provident Metals on Facebook and read our weekly blog posts.