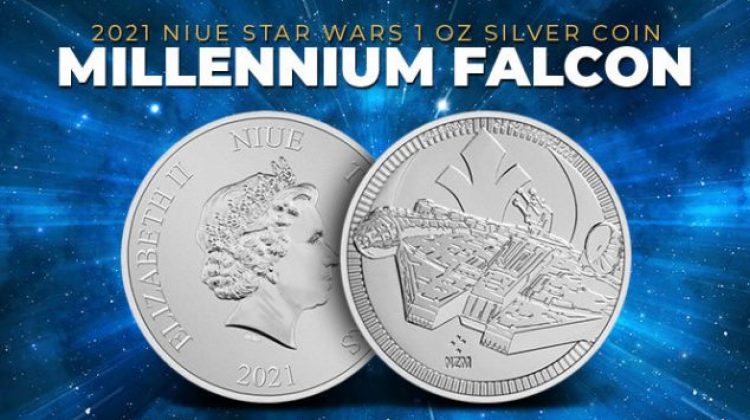 Over the course of nine major feature films in the Star Wars franchise, there was one ship that could always be trusted to slip past the forces of the Empire. Captained by gambler and con-artist Lando Calrissian, and later Han Solo, the Millennium Falcon looked like a rust bucket. Underneath the shabby exterior of the ship, however, was a vessel that Captain Solo believed was the fastest in the galaxy. From the New Zealand Mint’s lineup of Niue silver coins, the Millennium Falcon joins a long list of silver coins issued for the small island nation with a Star Wars design theme.

On the reverse face of the 2021 Niue Star Wars Millennium Falcon 1 oz Silver Coin is the cargo freighter reputed to be the fastest in the galaxy. Even though the Millennium Falcon is nothing flashy to look at, with its humble original role and shabby appearance, the starship played a critical role in many of the most important victories scored by the Rebel Alliance and the New Republic. The Falcon is shown here with the Rebel Alliance logo in the background field. There is an inscription along the top rim that read “Fine Silver” and includes the LucasFilm copyright. You will also find the New Zealand Mint mark in the bottom-center field. This includes the four-star constellation known as the Southern Cross and the initials “NZM.”

The obverse of 2021 Niue Star Wars Millennium Falcon Silver Coins comes with a depiction of Queen Elizabeth II. Her Majesty is featured here in right-profile relief in what is considered the fourth-generation design from the Royal Mint. To many nations of the South Pacific, it is either the fourth- or fifth-generation portrait. Either way, it was designed by Ian Rank-Broadley in 1998 for the Royal Mint of England. The design is one of the most elegant portraits of the Queen ever used on British and Commonwealth coins. It shows the Queen with the Girls of Great Britain and Ireland Tiara on her head. This tiara is said to be her favorite and was gifted to the Queen’s grandmother, Mary of Teck, when she married the Queen’s grandfather, King George V. Inscriptions on this face of the coin include “Elizabeth II,” “Niue,” “Two Dollars,” and “2021.”

The new 2021 Millennium Falcon 1 oz Silver Coin is the latest Star Wars-themed release from the New Zealand Mint. Each coin has 1 Troy oz of .999 pure silver available in Brilliant Uncirculated condition. The coins ship individually inside of protective plastic flips, by multiples of 25 in acrylic tubes, and by multiples of 250 in themed Monster Boxes. The Monster Box has a themed lid with the image of the Millennium Falcon. The Monster Box comes with a total 10 separate 25-coin tubes. The mintage of this design is limited to 100,000 silver coins.

Star Wars-themed silver coins are available from the New Zealand Mint in a variety of different collections. Some of the original releases in this design collection include effigies of famous characters from the original trilogy of films. These are known as the Star Wars Classic coins. With the arrival of a new trilogy and the first-ever standalone films in the Star Wars franchise, the New Zealand Mint introduced more coin collections. With the continued popularity of Star Wars designs, the New Zealand Mint has branched out to offer special character designs for investors. These include the long-running Darth Vader series with new images of the iconic foil and a 2020 Boba Fett release. Both of those coins have sold out, and the Millennium Falcon issue now joins them as a one-of-a-kind release that you can expect to sell out quickly.

History of the New Zealand Mint

The 2021 Millennium Falcon is the latest release from the NZ Mint and is sure to follow the popularity of the Darth Vader and Boba Fett issues when it comes to demand. Please contact Provident Metals if you have any questions about this release. Our customer service team is available at 800-313-3315, online through our live chat, and via our email address. Don’t forget to follow us on social media and read our weekly blog posts for more information on our upcoming releases.