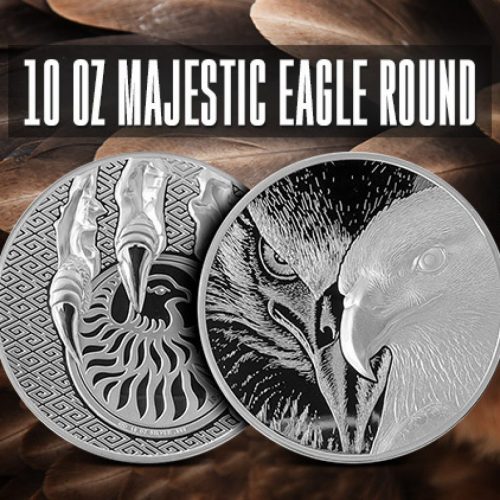 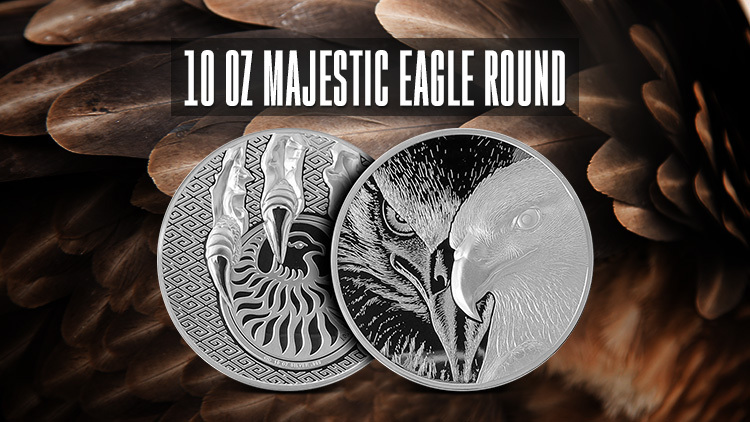 What is Ultra High Relief?

Many of the silver rounds produced by private mints have either high-relief or ultra-high-relief strikes. The concept behind either type of strike is to create visual depth to the background field and 3D visuals for the design element. With an ultra-high-relief strike, the mint uses the design die to strike the silver blanks multiple times with the coining press delivering immense pressure. The end product for the 10 oz Silver Majestic Eagle Round is a silver bullion product with impressive 3D relief for the eagle heads on the reverse and the powerful talons on the obverse, while contrasting those elements against background fields with enhanced visual depth.

For the obverse field of the 10 oz Silver Majestic Eagle Round, the design element displays the powerful of an eagle’s talons with an artistic depiction of an eagle. The power of the eagle’s talon is on full display as it grips the artistic design element in the lower portion of the field. The claws of the eagle are razor sharp, yet seem to delicately grip a small circular design. That design features an eagle in right-profile relief with its head turned to the right of the design field and stylized wings swooping around its figure. Within that smaller field, you will notice inscriptions of “10 oz Silver .999.”

In the reverse design element of the 10 oz Silver Majestic Eagle Rounds, you will notice the heads of two eagles. One of the eagle’s heads is in front-facing relief and takes up the full background field. The eagle is gazing downward with its eyes fixed on the viewer. In the foreground, another eagle’s head is shown in left-profile relief.

Details of the Silver Rounds

The 10 oz Silver Majestic Eagle Rounds are available to purchase with 10 Troy oz of .999 pure silver content per round. The rounds in this series ship individually inside of a protective plastic capsule and have a maximum mintage of just 1,000 silver rounds.

The world is home to a total of 74 eagle species. Although all eagles are part of the same family in the scientific classification system, the various species are spread out across various groups of genera and not all of those species are closely related genetically. The largest eagle in the world comes from the Steller’s sea eagle subspecies and is native to Russia, though it can also be found in Japan and Korea. The largest member of the species ever recorded was captured in January 2001 weighing 20 lbs. The average wingspan of the species is between 7 ft 2in. and 8 ft 3in.

Generally speaking, eagles are split into four subspecies of fish/sea eagles, booted eagles, snake eagles, and harpy eagles. The eagle is one of the most popular animals in cultural heraldry. Viewed as the King of the Birds, contrasting the lion as the King of the Beasts, the eagle has been used by numerous nations. While the lion is symbolic of a kingdom, eagles were used as a symbol of empires by mighty empires of history ranging from the Roman Empire and Holy Roman Empire to The Byzantine Empire, Russian Empire, and Austro-Hungarian Empire.

Now is your chance to collect the beautiful design of the 10 oz Silver Majestic Eagle Round courtesy of Provident Metals. Our team is available to answer your questions on the phone at 800-313-3315, online using our live chat, and via our email address. Remember to read our blog posts each week and follow us on Facebook for regular updates.