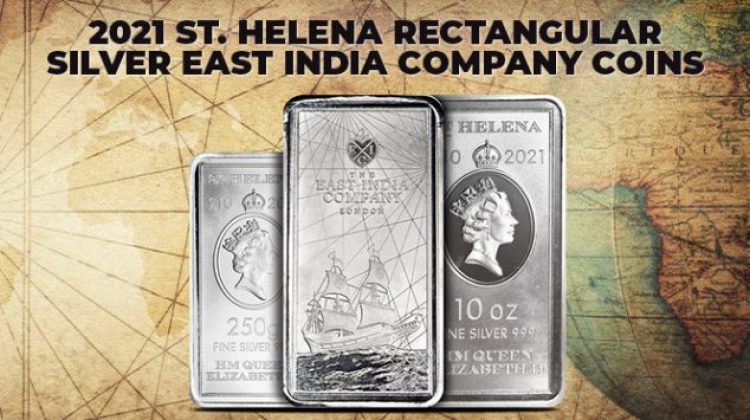 Silver investors don’t necessarily have to choose between a silver coin and a silver bar when investing in the popular metal anymore. The increasing number of rectangular silver coins combines the beautiful designs common on silver bullion coins, and the legal tender status of those pieces, with the shape and style of silver bars. The continuing partnership between the modern East India Company and the Issuing Authority of St. Helena now brings investors a chance at the best of both worlds with new rectangular silver coins. Learn all about the latest release of St. Helena silver courtesy of the East India Company.

On the obverse of the 2021 St. Helena Rectangular East India Company 10 oz and 250 Gram Silver Coins, you will find an effigy of Queen Elizabeth II. The island of St. Helena is a British Overseas Territory with Ascension and Tristan da Cunha with Elizabeth II as the monarch of the island. Her Majesty is featured in right-profile relief inside of an oval portrait frame with the Imperial State Crown at the top. In the portrait, the Queen wears the George IV State Diadem crown. Designed in 1985 by Raphael Maklouf, the effigy was originally criticized for portraying the Queen in an idyllic and unrealistic image that did not match her age. Maklouf responded by stating that his design sought to capture the timeless, regal nature of the monarch. Inscriptions on this field include “St. Helena,” “10 Pound,” “2021” “10 oz,” “Fine Silver 999,” and “HM Queen Elizabeth II.” The 250 Gram coin has the same inscriptions, with “10 oz” replaced by “250 g.”

Background on the East India Company

Queen Elizabeth I gave the East India Company its Royal Charter in 1600 following the company’s formation. The original East India Company was founded with the intent to foster greater trade between the Indian Ocean and the British Isles. The company originally formed trade routes, partnerships, and even colonies on the Indian Subcontinent and in Southeast Asia. It would later gain access to Hong Kong and other Chinese ports following the First Opium War. It also established and maintained both trading posts and colonies in the Persian Gulf. The company eventually took full control of India in 1757, not only ruling over the colonies of the region, but also issuing its own coinage for India that would form the foundation of Indian currency until 1947 when India gained independence.

The East India Company issued its first coinage in 1601 as its first vessels set out from England with cargo. Those initial vessels were carrying heavy cloths from the textile manufacturers in England, as well as 6,000 Pound sterling in silver coins with the portrait of Queen Elizabeth I. The company would go on to issue coins for its various colonies and regions in the East Indies, including British Guineas, Bombay Rupees, and the first-ever local coins for St. Helena.

Connection Between the East India Company and St. Helena

Please feel free to reach out to Provident Metals with any questions about these brilliant new silver rectangular coins. Our customer service team can assist you at 800-313-3315, chat with you live online, or respond in writing via email. We also encourage you to follow us on Facebook and keep up with our weekly blog posts for in-depth information on new products.