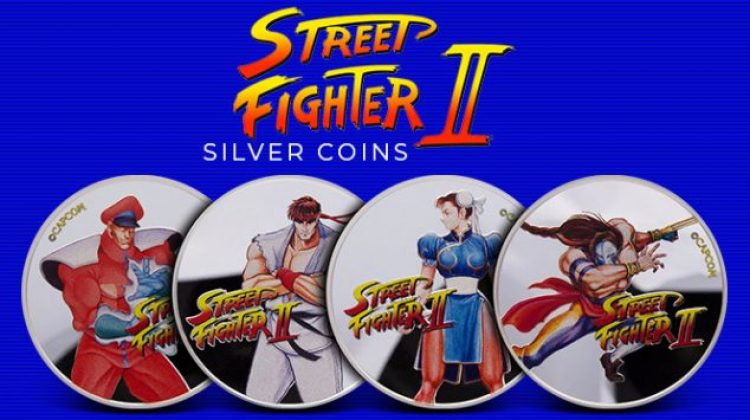 In the 1990s, arcades around the world were struggling to keep gamers coming through the doors as the popularity of in-home consoles grew. What the industry needed as a brilliant new game to keep people flocking to arcades, and the 1991 release of Street Fighter II: World Warrior did just that. As of 2017, Street Fighter II was still one of the three highest-grossing video games of all time with revenue of $10 billion. To mark its 30th anniversary, Capcom authorized the use of character images on a series of Fijian silver bullion coins. These beautiful foreign silver coins are now available at Provident Metals.

On the obverse of all coins in the series is a depiction of the national coat of arms for Fiji. The national seal of Fiji consists of a quartered shield. The quadrants feature images of sugar cane, a coconut palm, a dove with an olive branch, and a bundle of bananas. The top of the shield has a lion in passant guardant with a cocoa pod in its paws. Above the shield, you will notice a Polynesian canoe with an outrigger attachment and two native Fijian figures. The inscriptions on this side of the coin read FIJI, 2021, 1 OZ, .999 FINE SILVER, and 50 CENTS.

The coins in the Colorized Street Fighter II Silver Series come with individual capsules. Each coin is a 1 oz Silver coin with a $.50 face value backed by the Reserve Bank of Fiji. These coins have colorization only on the reverse fields, with the character, Street Fighter II name, and Capcom logo all colorized. There is a limited mintage for each design of just 5,000 silver coins.

Street Fighter II debuted at just the right time for thousands of arcades around the world. The rise of in-home consoles like Nintendo and Super Nintendo presented a challenge for arcades everywhere. The popularity of the game changes in Street Fighter II and the enhanced player-v-player focus helped drive more gamers to arcades. In total, Street Fighter II sold more than 200,000 arcade cabinets around the world, with 15 million software units also sold. On the Super Nintendo console alone, 6.3 million copies of the game were sold, making it the best-selling single software game from Capcom for more than two decades.

Collect These Colorized Street Fighter II Coins While You Can!

Now is the perfect time to collect Colorized Street Fighter II coins. With limited mintages, these coins are gone for good once they are sold out. Provident Metals’ customer service is available to assist you at 800-313-3315. You can also chat with us live online or email us directly. Remember to follow us on Facebook and check back with our blog each week for more information on the next exciting release.