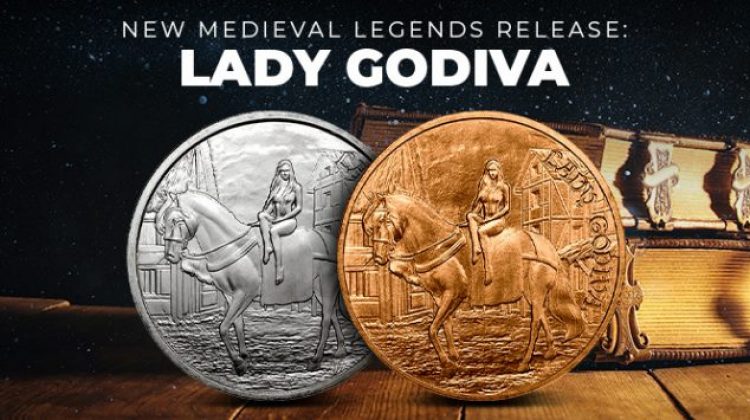 The Medieval Era of human history is full of legends that have captivated readers for centuries and audiences in theaters for decades. The Medieval Legends Series at Provident Metals has already featured two of the most popular, legendary figures from the Medieval Era with its Robin Hood and Pied Piper designs. Now, a new figure joins this series with the Lady Godiva release. While Lady Godiva was a very real person, it is her exploits that are part of the folklore of Medieval England. Let’s take a closer look at the legend of her nude ride through the center of Coventry.

On the obverse of the 1 oz Silver Medieval Legends Lady Godiva and 1 oz Copper Medieval Legends Lady Godiva Rounds, you will find the alluring image of Lady Godiva. She is depicted here as she is best remembered in folklore, riding through the streets of Coventry with nothing to cover her body but her long, flowing hair. The tale of Lady Godiva’s ride is one that has been told and retold over the last ten centuries. The lone inscription on this side reads LADY GODIVA.

The reverse design of both Medieval Legends Lady Godiva Rounds continues with the common design element for the series. Here, you will find a modest table setting within the room of a Medieval stone castle. However, while this design looks like a simple wooden table with random artifacts, it is, in reality, a sneak peek into the broader Medieval Legends Series. The relics found on this table represent the seven figures that will feature throughout this collection. Inscriptions read either ONE TROY OUNCE .999 FINE SILVER or ONE OUNCE .999 FINE COPPER, depending on which round you are looking at.

Details of the Lady Godiva Release

As with the past issues of the Medieval Legends Series, the Lady Godiva release will be available for a limited time only. There is no mintage cap, but once the next design in the series is ready for release, production will cease for the Lady Godiva design. The rounds, silver and copper, are offered individually in plastic flips, by multiples of 20 rounds in acrylic tubes, and by multiples of 500 rounds in a box. For the avid collector in this series, don’t forget that there is a Provident Metals-branded 14-Piece Collector’s Box available that allows you to store one of each design in silver and copper within a beautiful display.

The Story of a Ride

Lady Godiva lived in Coventry, England, in the 11th century. A noblewoman married the Leofric, the Earl of Mercia, she was well-known in her day as a patron of various monasteries in Mercia. However, she is remembered in popular folklore for her legendary, naked ride through the center of Coventry. The rumors suggest that Lady Godiva took her husband at his word when he said he’d lower taxes on the people of Coventry if she rode naked through town. Whether she did so or not remains open to debate, but this legend has spawned other legends and myths as well. For example, some versions of this tale suggest that the streets of Coventry were ordered clear of all people for Lady Godiva to complete her naked ride. However, it is said that a man named Tom dared to come out and glance at Lady Godiva, and in so doing was struck blind. This gave rise to the term Peeping Tom.

There’s no time like the present to add the Lady Godiva design to your Medieval Legends Series. If you have questions, Provident Metals can help. Please call us at 800-313-3315, chat with us live online, or email us directly.