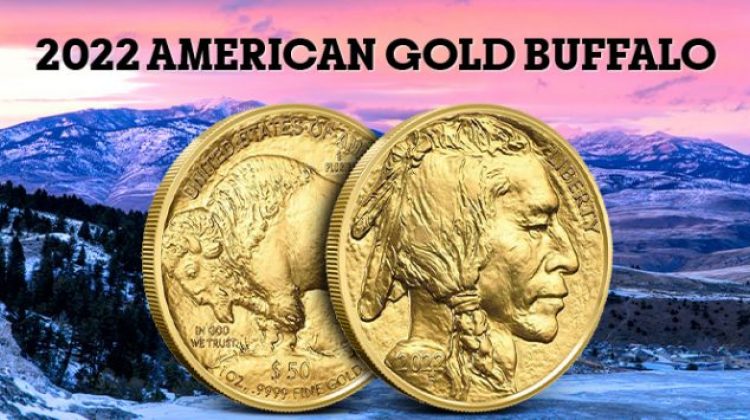 When you shop the gold for sale at the United States Mint, you will find coins available every year that features 24-karat gold content. However, there is only one gold coin available from the US Mint each year that is consistently struck with the same designs. The American Buffalo 1 oz Gold Coin, the first 24-karat gold coin in American history, is the only coin issued each and every year and has been in production at the mint since 2006. In 2022, the American Buffalo Gold Coin is available yet again and comes off the back of surging demand in 2020 and 2021.

For the obverse design of 2022 American Buffalo 1 oz Gold Coins, the United States Mint features James Earle Fraser’s composite image of an indigenous tribal figure. The source of this image has generated controversy for more than a century. Fraser himself rarely told the exact same story when discussing the inspiration for this right-profile portrait. The image captures an indigenous male figure with feathers woven in his hair and braids down the side of his head. The inscriptions include LIBERTY, 2022, and the F initial of James Earle Fraser.

Over the course of his lifetime, Fraser gave varying accounts of who inspired his indigenous figure composite. He initially told the US Mint director in 1913 that Iron Tail of the Sioux and Two Moons of the Kiowa were his primary resource for the physical characteristics of the figure, as well as “one or two others.” In 1931, Two Guns White Calf, the son of the last Blackfoot chief, claimed to be a model for the design as well. John Big Tree of the Seneca also claimed to be the inspiration, even making public appearances claiming to be the “nickel Indian” up until his death in 1967.

In the reverse design of 2022 American Buffalo Gold Coins, Fraser sought to keep his All-American design concept intact with the depiction of an American bison. The largest land mammal in North America, the bison is instantly identifiable as American. The bison is shown in left-profile relief on a small mound of dirt with inscriptions filling the field that read UNITED STATES OF AMERICA, E PLURIBUS UNUM, IN GOD WE TRUST, $50, and 1 OZ. .9999 FINE GOLD.

The inspiration for Fraser’s bison design has no controversy surrounding the source. Fraser is said to have used Black Diamond, a resident bison at the Central Park Zoo in New York City in the early 20th century, as the source of his imagery.

History of the American Buffalo

The American Buffalo Gold BU Coin has seen wild fluctuations in demand in its nearly two decades in production. The 2022 release is the 17th date mark overall. The 2006 issue remains the highest minted in the history of the series, debuting with sales of 337,012 coins. The American Buffalo, more so than the American Eagles, seem very susceptible to the ebbs and flows of gold prices and other market factors. The two lowest mintage figures in the program came relatively recently with 2019 marking the lowest in the program’s history. Just 61,500 American Buffalos were sold that year amidst a red-hot global stock market. However, the 2020 release set the third-highest mintage in the series with 242,000 coins sold as the COVID-19 pandemic crashed markets and raised a lot of uncertainty for the future.

Invest in the American Buffalo at Provident Metals

If you have any questions, Provident Metals is happy to help. Please call us at 800-313-3315, chat with us live online, or simply send us an email. You can also follow us on Facebook for weekly posts and product links to special items or deals on sale items.