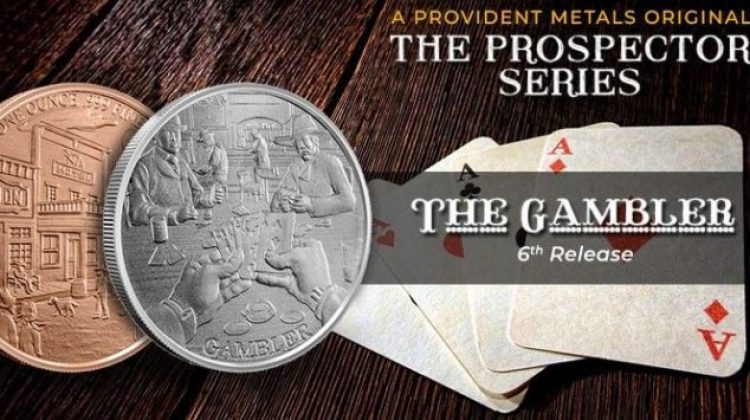 Enjoy a Game of Chance with The Gambler

For the sixth design in the Prospector Series, Provident Metals offers the image of a Wild West Gambler hoping to strike it rich. While hundreds of thousands of Americans and other immigrants moved west following the discovery of gold in California hoping to discover untold wealth in the gold mines of the west, others simply moved west in search of a new lease on life.

In the obverse design of the new 1 oz Silver Prospector Series Gambler Round, you see life in a Wild West saloon through the eyes of The Gambler. From this perspective, you see the cards in The Gambler’s hand as he considers his next move at the table. As he ponders his move, the other gamblers look on anxiously wondering if they’ve got the upper hand or perhaps even questioning whether The Gambler will cheat to win.

On the reverse of the Prospector Series Gambler Rounds, you will find the same design Provident Metals has used throughout this series. Here, you can see the main street in a tiny Wild West town. Along this dirt road, you’ll see the residents and visitors to this town moving about their daily routines in front of the local hotel and saloon.

Options and Details for The Gambler

Gambling in the American West

All kinds of characters moved west as the United States expanded its territory in the 19th century. From farmers and ranchers to miners, prospectors, and outlaws, it took all kinds to populate the west. As Americans and others moved west, they brought with them a pastime that had originated in New Orleans in the early 1800s: gambling. Gambling dens offered an economic boom for New Orleans in the late 18th and early 19th centuries.

As populations expanded along the Mississippi River and westward, gambling moved with them. In an era before professional sports, bowling alleys, golf courses, and movie theaters, gambling provided the number one form of entertainment in the American West. Everyone from miners, prospectors, and town folks to outlaws and law enforcement officers indulged in the entertainment offered by blackjack and poker tables in local saloons. Unfortunately, this entertainment often involved a little gunplay as accusations of cheating or settling old scores often resulted in guns being drawn in or out of saloons following a game.

Add The Gambler to Your Prospector Series Collection

If you have any questions about the latest release in the Prospector Series, Provident Metals’ customer service is happy to help. Please call us at 800-313-3315, chat with us live online, or simply send us an email with your inquiries. You can also follow us on Facebook for information on new releases or read our weekly blogs for a more in-depth look at new and upcoming releases.