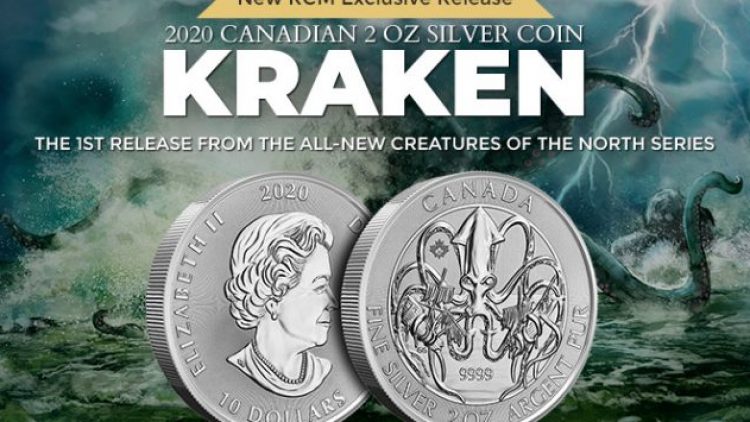 A variety of beautiful 2 oz silver bullion coins are available from the Royal Canadian Mint to kickoff the 2020 release schedule. Among them is one that blends the mint’s traditional approach to wildlife designs with the creatures of the mythical world. The Creatures of the North 2 oz silver coin is now available for presale from Provident Metals and it focuses on one of the most feared beasts of antiquity. Emerging from the depths with massive tentacles capable of ripping wooden sailing vessels to pieces, the Kraken has occupied the nightmares of sailors around the world for more than 770 years. Right now is your chance to be among the first to invest in the new designs from the Creatures of the North!

On what no doubt seemed like a normal day, the sailing vessel depicted on the reverse of the 2020 Canadian Kraken 2 oz Silver Coin has instead met with doom as it crept too close to the lair of the Kraken. In this reverse design from Gerald Gloade, the massive beast has emerged from the waters to punish a ship that has come too close to its home and trespassed in its territorial waters. With its tentacles firmly wrapped around the hull of a large wooden sailing vessel, the Kraken has split the ship in two and broken its masts. All that’s left for the beast to do know is drag the ship and its crew down to the depths of Davy Jones’ locker.

This face of the coin includes inscriptions of “Canada,” “9999,” “Fine Silver 2 oz Argent Pur,” and the initials “GG.” Artist Gerald Gloade created the Kraken design for the Creatures of the North. The outer rim of the reverse design field has the Royal Canadian Mint’s radial lines feature and within the design field of the Kraken, you will also notice the laser micro-engraved maple leaf privy that includes the date mark of “20” at its center.

The obverse of the 2020 Canadian Kraken Silver Coin features the popular Queen Elizabeth II effigy. Her Majesty is depicted in right-profile relief in this design with no crown on her head. Artist Susanna Blunt created this portrait of the Queen in 2003 for Canadian coinage. It is the fourth-generation effigy of the Queen for Canadian denominations and just the second ever created by a Canadian artist.

Each of the 2020 Canadian Kraken Silver Coins is a 2 oz silver specimen with .9999 metal fineness. The coins have a face value of $10 (CAD) and each one is available in Brilliant Uncirculated condition. Individual coins ship inside of protective plastic flips, with multiples offered in tubes of 14 coins or boxes of 280 coins. Each coin has a reeded edge and is exceptionally thick. Even though these are 2 oz silver bullion coins, each one has the same diameter of 38 mm you would find on a Canadian Maple Leaf 1 oz Silver Coin. When you hold these coins in your hand, you get a true sense for the heft of each one.

The Tale of the Kraken

Stories of the Kraken first emerged during the 13th century when Viking sailors spoke of a massive, tentacled beast waiting in the depths of the North Atlantic between Norway and Greenland. Around the year 1250, an anonymous author shared an incredibly detailed account of the beast in a natural history work known as the Konungs skuggsja. The writer had just returned from Greenland and spoke in intricate detail of the size and characteristics of the beast, as well as its supposed breeding habits. This anonymous author surmised there were only two of the beasts in existence, but the rumors of this legendary beast would soon circle the globe.

By the mid-16th century, you could look at sailing charts and maps of the world and find depictions of the Kraken far outside the North Atlantic Ocean. Sailors and cartographers charted the existence of the Kraken in such places as New Zealand, South Africa, the Caribbean, and even off the coast of Canada.

A Kraken in Canada?

Well into the 19th century, sailors around the globe still believed in the existence of and feared the Kraken. Sailors traversing the sea routes between Canada and the United Kingdom believed the creature to be real. It didn’t help matters when a real-life creature from the deep washed up on the shores of Glovers Bay in Newfoundland. With mankind’s knowledge of the creatures in the depths of the oceans always evolving, the people of the 19th century were not aware of many of the beasts lurking beneath the waves. With the Kraken believed by many to be real, residents of Canada were terrified to discover a 55-foot long squid washed up on shore in 1878.

Shop Early at Provident Metals and Get Your Kraken First!

The 2020 Canadian Kraken 2 oz Silver Coins are now available for presale purchasing at Provident Metals. The coins are expected to be in stock on or around February 25th, but you don’t have to wait to buy. Make your purchase today, and as soon as the coins are in stock we will work on getting them packed and shipped to you. Please feel free to reach out to us at Provident Metals if you have any questions. You can reach us on the phone at 800-313-3315, chat with us live online, or simply send us an email.