The Star Wars feature films have a lot of familiar faces that generations of people have come to know. Han Solo, Princess Leia, and Luke Skywalker are just a few of those faces that are instantly recognizable by fans of the franchise and even those who’ve seen the films only once. However, there is one face with cult status among fans of the franchise that you’ve never actually seen: Boba Fett. Famed for having few lines and never removing his helmet, Boba Fett is the bounty hunter who captures Han Solo in The Empire Strikes Back. He is now the latest character to feature in the Star Wars Classic Series from the New Zealand Mint. 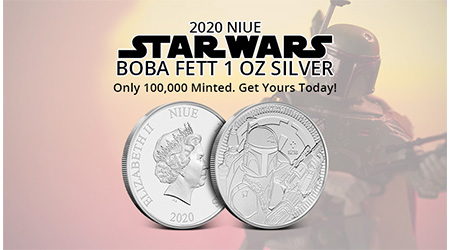 The reverse face of the 2020 Niue Star Wars Boba Fett 1 oz Silver Coin includes a depiction of the bounty hunter. You can see every detail in the famous Mandalorian armor that Boba Fett wears throughout the feature films. His blaster is clutched in both hands, his iconic helmet is in the center of the design, and you can see the jetpack on his back that he uses to nimbly move about in the midst of a battle. There are inscriptions on this face of the coin that includes “1 oz 999 Fine Silver” and “NZM” near the mint mark of the New Zealand Mint. The NZ Mint logo features the Southern Cross constellation of stars.

On the obverse side of 2020 Niue Star Wars Boba Fett 1 oz Silver Coins is a portrait of Queen Elizabeth II. Her Majesty is shown here in right-profile relief in a design created by Ian Rank-Broadley in 1998. This design shows the Queen with the Girls of Great Britain and Ireland Tiara, a tiara gifted to her grandmother Mary of Teck upon her marriage to the Queen’s grandfather, King George V. The inscriptions on this side of the coin read “Elizabeth II,” “Niue,” “Two Dollars,” and “2020.”

All of the 2020 Niue Star Wars Boba Fett 1 oz Silver Coins feature .999 pure silver content and arrive in Brilliant Uncirculated condition. The coins have a $2 (NZD) face value supported by Niue. Individual specimens in this series are available to you inside of individual protective plastic flips. Multiples come with mint packaging options that include tubes or Monster Boxes. Each tube holds 25 silver coins, while the Monster Box contains a total of 250 silver coins housed in 10 separate tubes. The Monster Box also features a Star Wars-themed design on the lid with an image of Boba Fett. The maximum mintage for this release is 100,000 silver coins.

Because Boba Fett had few lines and was never shown without his helmet throughout the vast majority of his appearances in the feature films, several actors lent their voices and bodies to the role of Boba Fett. The first to do so was Don Francks who voiced Boba Fett in his first appearance, the 1978 release of Star Wars Holiday Special. Jeremy Bulloch voiced and performed in the role of Boba Fett in The Empire Strikes Back and the Return of the Jedi in the original trilogy. John Morton played Boba Fett in one scene in The Empire Strikes Back.

The only glimpse of Boba Fett’s face that fans ever get is a young version of Boba in Attack of the Clones when Daniel Logan portrayed the young Boba. This appearance shows fans how Boba came to be a bounty hunter as he was the cloned son of Jango Fett.

The new 2020 Boba Fett release is available to investors now. If you have any questions, Provident Metals is ready to assist. Our team is available at 800-313-3315, online via our live chat, and using our email address. Don’t forget to follow us on Facebook and check-in weekly with our blog.