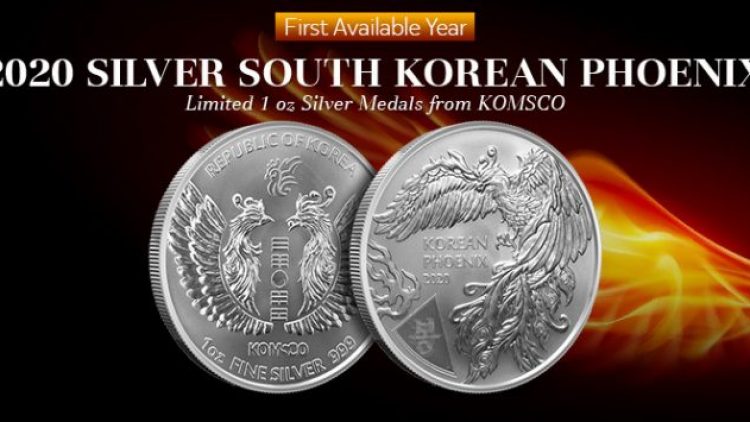 KOMSCO is growing its portfolio of brilliant silver bullion options in 2020 with the introduction of a new coin based in Korean design themes. The new 1 oz Silver 2020 South Korean Phoenix Medal is available for the first time with the image of a mythical bird rooted Korean mythology and featured in the modern era in the governmental seals of the office of the President of South Korea. Today, the new silver medal in the South Korean Phoenix issue is available at Provident Metals, and now is your chance to find out more about this impressive new release. 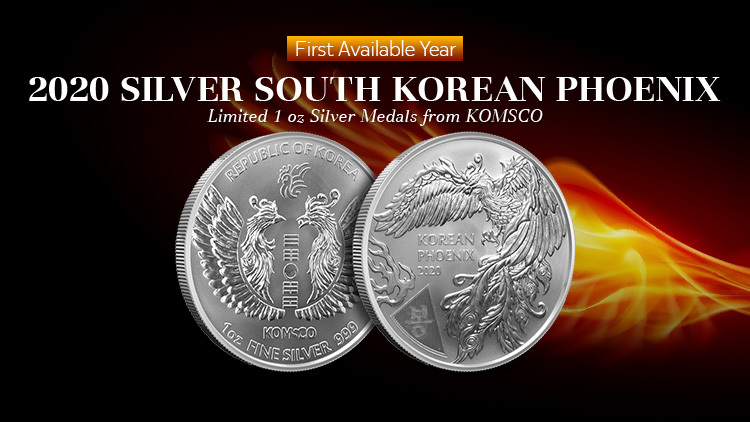 On the obverse field of the 1 oz Silver 2020 South Korean Phoenix Medal is a depiction of the mythological bird taking flight. The phoenix famously lives for up to 500 years, according to ancient tales, and when it reaches the end of its life cycle spontaneously bursts into flames in a brilliant display. From the ashes of that old bird, a new phoenix rises to take flight and symbolize renewal. In this design, the phoenix is shown in its full glory with its long, ornate feathers flowing both from its head and its tail, with the latter set of feather swooping elegantly beneath its frame as its wings are stretched wide to support its liftoff into flight.

A new security feature from KOMSCO makes its debut with this series. While previous issues of KOMSCO silver bullion use a security element on the reverse that is actually struck into the surface of the coin rather than being created on the surface after coining. The image uses vertical lines that physically display the symbols for “Bong Hwang,” the Korean language word for the phoenix, depending upon the viewing angle.

To go along with the new design on the obverse debut of this series, a unique reverse image is offered on the Silver 2020 South Korean Phoenix Medal. This design is based on the seal of the office of the President of the Republic of Korea. The symbol has at its heart the Taeguk, the official emblem of the government of South Korea. The seal is flanked by ornate, stylized phoenixes with a third phoenix above the design element. The central design feature of this field is loosely based on the symbolism used in the Presidential Seal and Presidential Standard for the Republic of Korea. The primary difference between this design and the real-life symbols is the use of the rose emblem in the Presidential Seal and Standard, not the Taeguk as featured here.

In the 1 oz Silver 2020 South Korean Phoenix release, the silver bullion medals are all available through Provident Metals in Brilliant Uncirculated condition. Individual medals are housed in protective plastic flips, with multiples packaged in tubes of 25 medals and boxes of 250 medals containing 10 tubes in all. This is the first release of this design and KOMSCO has no announced mintage maximums.

Meaning and Symbolism of the Phoenix

The image of the phoenix is more than just a modern symbol representing the seat of power and office of the president. It dates back more than 1,000 years to cave art discovered on the Korean peninsula. Beginning with the Joseon Dynasty around 1392, the phoenix became of a symbol of the power of emperors and kings well before the modern government adopted it for the office of the president in the 1970s.

The new Silver 2020 South Korean Phoenix Medals are available currently from Provident Metals. For those who have questions, our customer service team is available to assist in the phone at 800-313-3315, online using our live chat, and via our email address. We encourage you to follow us on Facebook for regular updates and weekly spot-price contests and don’t forget to read our weekly blogs for more in-depth information on new and upcoming releases.