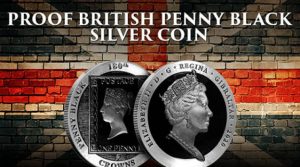 Most modern public postal systems look the same around the world. When you want to mail a letter or package today, you pay the carrier upfront to ensure your item is mailed to its destination. For that, you can thank the United Kingdom and the introduction of the Penny Black stamp in 1840. It was the world’s first pre-paid postage stamp and the first-ever adhesive stamp. Over the last several years, the Pobjoy Mint has marked each five-year anniversary of the Black Penny with a recreation of its image on proof silver coins. As 2020 marks the 180th anniversary of the Penny Black, Pobjoy Mint is back with another option and the 5 oz silver coin it produced is the largest replication of the beautiful Penny Black imagery. You can now own this piece of history by purchasing the new proof coins through Provident Metals. 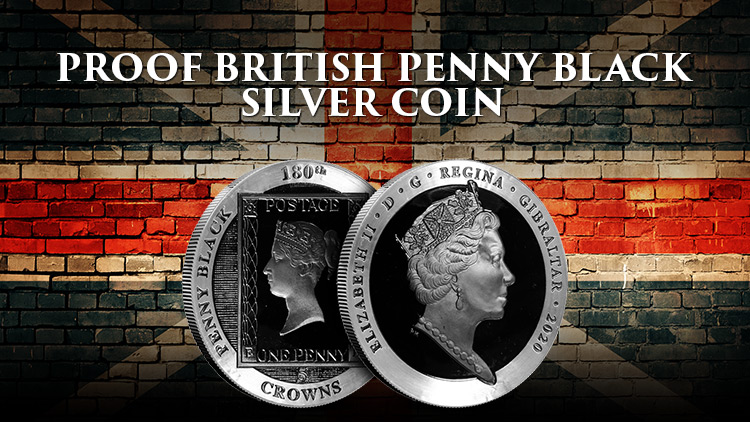 On the reverse field of each of the 2020 Proof British Penny Black 5 oz Silver Coins is a depiction of Queen Victoria on the Penny Black stamp. The stamp was so-named for its black appearance with white design and its cost of One Penny. On this side of the coin, you will find the Penny Black stamp with markings of “Postage” and “One Penny” on the same design. The rest of the coin has inscriptions on the rim of “Penny Black,” “180th Anniversary,” and “Crowns.” The Crowns is associated with the “5” inscribed above it within the design field. Queen Victoria, the second longest-reigning monarch in British history behind her great-granddaughter, the current monarch Queen Elizabeth II.

The obverse side of all 2020 Proof British Penny Black Silver Coins includes the right-profile bust of Queen Elizabeth II. This depiction of Her Majesty is exclusive to the Pobjoy Mint and depicts the Queen in a bust that includes her shoulders and neckline. A necklace rests on her shoulders, with earrings in and the George IV State Diadem Crown on her head. Part of the official crown jewels, the George IV State Diadem was commissioned by King George IV in the first year of his reign in 1820 with a total of 1,333 diamonds in the crown that weight more than 300 karats. Inscriptions on this face of the coin feature “Elizabeth II,” “D.G. Regina,” “Gibraltar,” and “2020.”

D.G. Regina is a shortened version of the Latin phrase Dei Gratia Regina. It translates into English as “By the Grace of God, Queen.” This refers to the English monarch’s position as the defender of the faith. Gibraltar is the nation of issue associated with these coins. Situated at the southern tip of the Iberian Peninsula, Gibraltar is a British Overseas Territory with a landscape that is dominated by the Rock of Gibraltar.

Box and Certificate of Authenticity Packaging

The 2020 Proof British Penny Black 5 oz Silver Coin is available to you for individual purchase inside of a black presentation box from the Pobjoy Mint. Each of the coins come with a Certificate of Authenticity from the mint.

Prior to 1840, the postal system in the United Kingdom had grown to be very complex and its pricing system and anomalous. In 1837, the government began to look into options for lowering postage rates in the kingdom. Before the Penny Black and its payment concept were devised, letters and parcels were paid for by the recipient with the cost unknown until the package arrived. Letters and parcels were charged based on the weight of the item and the distance covered delivering it.

The Penny Black stamp introduced a new era for public postal systems. The pre-paid stamps cost 1 Penny and were introduced for use starting May 6, 1840. Her Majesty, Queen Victoria was depicted on the stamps and her image would go on to appear on postage stamps in the United Kingdom until her death in 1901.

Own the Penny Black Design Courtesy of Provident Metals

To celebrate the 180th anniversary of the Penny Black, you can now get the 2020 Proof British Penny Black 5 oz Silver Coin online from Provident Metals. Our customer service team is available to assist you at 800-313-3315, online using our live chat, and via our email address. You can also follow us on Facebook and read our blog each week for more information about our products.