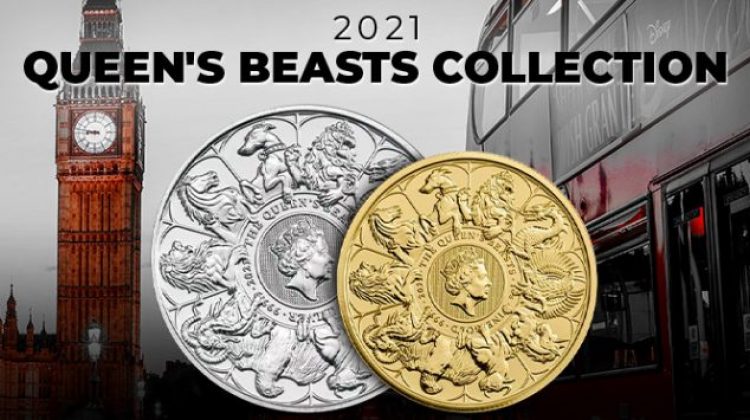 The Royal Mint issued the gold, silver, and platinum coins of the Queen’s Beast Series from 2016 to 2021. The 10 designs in this collection started out on 1 oz gold, 1/4 oz gold, and 2 oz silver blanks in the BU Series. In 2017, the program expanded to offer 10 oz silver and 1 oz platinum in the BU Series. These coins, together with proof gold and silver pieces, all offered the 10 individual designs of the Queen’s Heraldic Beasts during a six-year period. With the last of the individual designs released, the Royal Mint now offers collectors of the Queen’s Beast Series one last hoorah in the form of a Queen’s Beast Collection Coin.

On the reverse side of the coins in the Queen’s Beast Collection release, you will find all 10 heraldic beasts featured throughout the series, along with Queen Elizabeth II’s portrait. The outer ring of the design field features all 10 beasts, starting with the Lion of England at the one o’clock position and moving around clockwise all the way to the White Greyhound of Richmond at 11 o’clock. In between, the beasts feature in the order of release for the series and include Red Dragon of Wales, Griffin of Edward III, White Unicorn of Scotland, Black Bull of Clarence, Falcon of the Plantagenets, Yale of Beaufort, White Lion of Mortimer, and White Horse of Hanover. At the center of the design is the current fifth-generation portrait of Queen Elizabeth II as found on the obverse of all British coinage. The inscriptions within the center field include THE QUEEN’S BEASTS, 2021, 999.9, and the respective weight and metal content of each coin.

For the obverse of the coins in the Queen’s Beast Collection, such as the 2021 British Queen’s Beast Collection 2 oz Silver Coin, the Royal Mint features the portrait of Queen Elizabeth II. Her Majesty is featured here in right-profile relief in a design created in July 2015 by Jody Clark, the youngest Royal Mint engraver to ever design a monarch portrait. The right-profile effigy shows the Queen aged 89 years with the George IV State Diadem Crown. The background field has a guilloche pattern, while the inscriptions include ELIZABETH II, D.G. REG. F.D., and the respective face value of each coin.