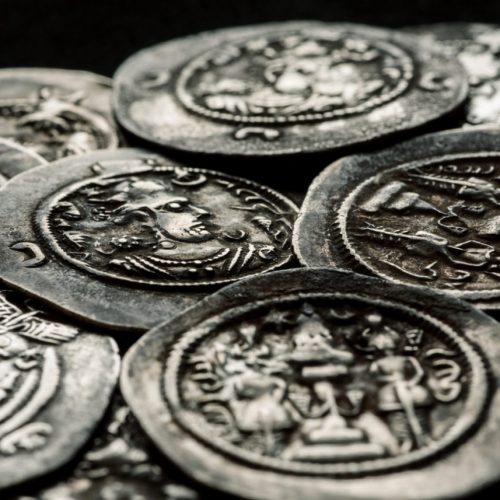 Across the ages, silver has been considered a valuable metal with a multitude of uses. After gold, silver is the most malleable and ductile metal, which makes it an ideal choice for artisans to create decorative items.

The chemical symbol of silver—Ag—comes from the Latin argentum, which means off-white. Ancient civilizations associated silver with the moon because of it’s greyish-white color, which contrasts with gold and its correlation to the sun. In fact, ancient Egyptians considered silver to be a near perfect metal, following only gold. They gave gold the symbol of a circle, and silver the symbol of a semi-circle.

Silver forms in igneous and metamorphic rocks and it is often found in minerals that contain silver compounds. Because of this, silver is commonly a sub-product of mining for minerals such as lead, copper, and zinc.

The first documentation of silver mining occurred around 3,000 BC in Anatolia, which is modern day Turkey. Closer to 1,200 BC, much of the region’s silver production shifted to Greece’s mines, though it could also be found across Europe and West Asia. Since silver ore generally contains lead, slaves were forced to work in the mines because free men didn’t want to die of lead poisoning (as many previously had).

A large silver mine near Athens, Greece was able to fund Athens’ first navy around 500 BC, which helped create the powerful city-state. After the First Punic War in the 250s BC, the Carthaginians took over Spanish mines and used the income to pay off debts to the Romans. During the Second Punic War, the mines fell into the hands of the Romans, who used the income to fund more conquests.

By 100 AD, Spanish mines became the major suppliers of silver for the Roman Empire. Silver started becoming increasingly more important for trade along Asian spice routes. To prepare the metal for export, it was hammered into thin sheets called plattum argentum, which was later shortened to the modern Spanish plata (meaning silver).

Silver mining continued to expand to numerous other countries, many of them in Central Europe. Vast growth in silver production—largely due to technological advances—was seen between 750 and 1,500 AD.

Though the search for gold was a big influence on the discovery of the New World in 1492, the excursion across the ocean reinvented the role of silver. Silver mining began to boom between 1500 and 1800, with 85 percent of world production occurring in Mexico, Bolivia, and Peru. Continued innovations led to increased silver production in North America, Central America, Australia, and Europe.

This last century has seen some major breakthroughs in silver mining, including steam-assisted drilling, mine dewatering, and improvements in hauling. These advancements continue to enhance our ability to separate silver from other ores.

Silver—like gold—was treasured by many cultures, and it’s uses ranged from ornamental to medicinal. Many wealthy families owned silver utensils, jewelry, religious talismans, and decor. Silver was also used as currency, in trade, and for the payment of debts. A gift of silver was seen as a symbol of trust and love.

Before the compilation of the Periodic Table, silver was considered one of seven sacred metals in alchemy. Silver was also associated with the sixth chakra (or the “third eye”) in the chakra system, which is a system of seven energy centers of the body that form a vertical line along the spine.

In Ayurvedic medicine, illness is thought to be caused by an energy imbalance. Precise combinations of pure metals were concocted in an attempt to restore that balance to a state of equilibrium. Silver was used as a liver and spleen detoxifier. In fact, silver—which has antibacterial properties—was used in medicine as late as the 1930s, before antibiotics were created.

More recently, silver bromide and other silver-halide salts have been used in photography. As a good conductor of heat and electricity, silver has also been used in various electrical applications. Silver continues to be a favorite material for jewelry and luxury items, as well as a valuable form of investment.

If you’d like to participate in this rich history and invest in silver, we recommend the Provident Prospector 1 oz silver round. This is one of our most popular rounds among investors and collectors alike.

What’s your favorite use for silver, whether you’re interested in historical information or based on modern uses?