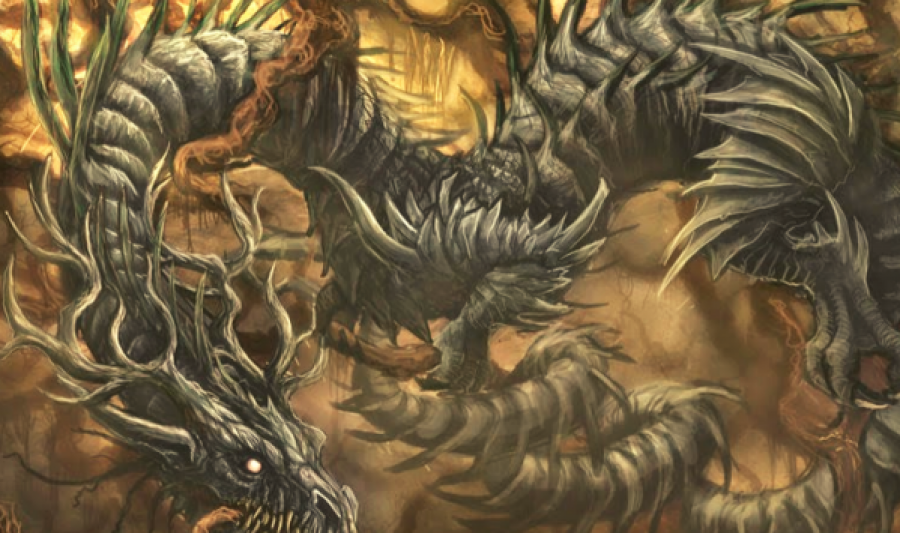 In ancient cultures, stories about gods and goddesses and heroes and monsters helped people explain nature’s mysterious forces and answer life’s big questions. Tales of these creatures and their supernatural powers were told and retold millions of times – from person to person, from trade port to trade port, and from generation to generation – manifesting into a hundred different versions around the world.

The story of the dragon is no different. Almost every culture on earth has its own ancient dragon myth. And we are proud to bring them to life in our EXCLUSIVE World of Dragons series of 1 oz silver and copper rounds! The fourth release in this exciting 6-design series celebrates The Norse dragon, one of the most fearsome creatures in Norse mythology. And he has a dramatic story to tell.

In ancient Norse mythology, the powerful god Odin reigned over a realm made up of nine worlds. Through all nine worlds grew a sacred Tree of Life called Yggdrasil, whose roots wove a fabric that held all of the worlds together.

But a destructive dragon lay in the darkest whirlpool of the underworld beneath Yggdrasil, gnawing at its roots. Part dragon and part serpent, this dragon (called Nidhogg) was a terrifying beast. Bright scales covered his body, bat-like wings unfurled from his sides, and piercing horns erupted from his head. His forelegs and massive claws helped him destroy the roots of Yggdrasil.

Over time, the vicious dragon finally managed to chew through the roots of Yggdrasil, withering the tree and plunging the worlds it supported into a three-year winter.

Triumphant and free from his hellish lair, Nidhogg flew up from the underworld and led the giants on an attack against Odin and the sacred gods, becoming the primary force of evil in the world that remained.

Like many fantastic characters from Norse mythology, Nidhogg has earned a special place in pop culture, inspiring dragon characters in several movies and video games, such as the World of Warcraft and Final Fantasy.

And Marvel fans may remember in the film Captain America:The First Avenger that it is Nidhogg’s eye that forms the button found in a carving of Yggdrasil, which is pushed to reveal the Tesseract. Needless to say, we are thrilled to bring Nidhogg to life in silver and copper!

The design for the 4th release is particularly special because it was based on many of your special requests! The obverse features the Norse Dragon’s scaly form as it prowls the underworld beneath the roots of the sacred Tree of Life. The reverse depicts the powerful reptilian eye of the dragon.

The final mintage of The Norse will be announced November 2019. Get yours while you can, because when they’re gone, they’re gone! World of Dragons rounds are released every three months in limited mintages. Each design will only be minted for approximately three months. The fifth release in the series will be available for sale on November 1, 2019.

We now have a special World of Dragons page! Bookmark this page to keep up-to-date on all the latest in the series, and be sure to click the “notify me” button on upcoming releases to receive an email as soon as they are available.

Previous: The Story of the Chinese Dragon: The 3rd release in the World of Dragons Series