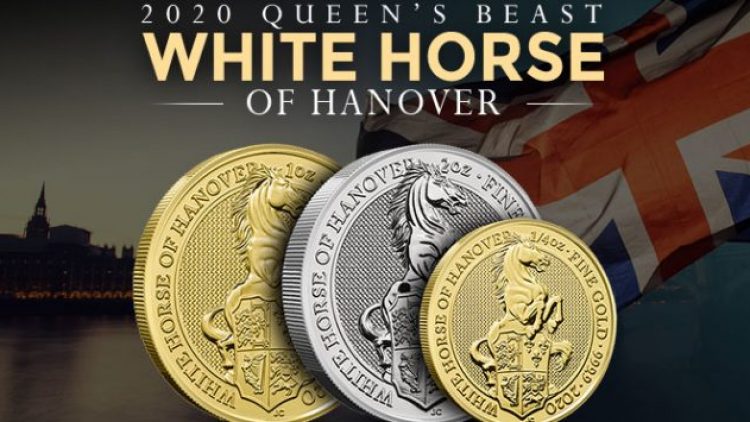 The Queen’s Beast Series catalogs in its designs the 10 heraldic beasts that were depicted in the form of statues at the official coronation ceremony of Queen Elizabeth II. As Her Majesty, the Queen entered Westminster Abbey in 1953 where the beasts that have featured in the Royal Arms of England over more than 800 years were waiting to support her ascension to the throne. These beasts came from different houses to control the crown over the centuries, with one of the more recent being the White Horse of Hanover. The House of Hanover controlled the throne of England for nearly 200 years from 1714 to 1901. Today, the new 2020 British Queen’s Beast White Horse bullion coins are available from Provident Metals.

In the 9th release of the Queen’s Beast Series, the Royal Mint of England features the primary heraldic beast of the House of Hanover. The 2020 British Queen’s Beast White Horse bullion coins feature a new reverse design with the White Horse, a powerful stallion, standing behind the Royal Arms of England from King George I. Upon his ascension to the throne of England, King George I made a slight alteration to the Royal Arms that had previously been carried by Queen Anne.

The Royal Arms of England featured in this design includes a quartered shield. The first quadrant of the shield has the impaled Three Lions of England and Lion of Scotland, a symbol of the union of the two crowns into one kingdom in 1707. The second quadrant maintained the French fleur de lis symbolizing the British crown’s claim to the throne of France. In the third quadrant, the Harp of Ireland that now symbolizes Northern Ireland in the United Kingdom, but at the time symbolized the whole of the island of Ireland. For George I, the fourth quadrant had the Arms of Hanover, complete with the White Horse of Hanover.

Since 2016, all British denominations feature the fifth-generation right-profile bust of Queen Elizabeth II. This design was created in July 2015 by Jody Clark and depicts the Queen at the age of 89. She wears the George IV State Diadem Crown commissioned by King George IV in the first year of his reign in 1820. The background field includes the guilloche design element and the coin has inscriptions of the face value, “Elizabeth II,” and “D.G. Reg F.D.”

Details of the White Horse of Hanover Release

While King George I used the Arms of Hanover in the fourth quadrant with the impaled Three Lions of England and Lion of Scotland together in the first quadrant. Starting in 1801 with the Acts of Union 1801, the French Revolution and wars with France in Europe resulted in the British monarchy relinquishing claims to the throne of France. As such, King George III altered the Royal Arms to place the Three Lions of England in the first and fourth quadrants alone, with the Lion of Scotland reinstalled in the second quadrant alone. The Harp of Ireland remained in the third quadrant, and the Arms of Hanover were now included centered on the shield above the other designs. From 1801 to 1816, the Arms of Hanover have an electoral bonnet. From 1816 to 1837, the bonnet was replaced with a crown as Hanover rose to the status of a kingdom following the defeat of France in the Napoleonic Wars.

History of the House of Hanover

The 2020 Queen’s Beast White Horse Coins are available to purchase through Provident Metals. You can call our customer service team for help at 800-313-3315, chat with us live online, or email us directly.