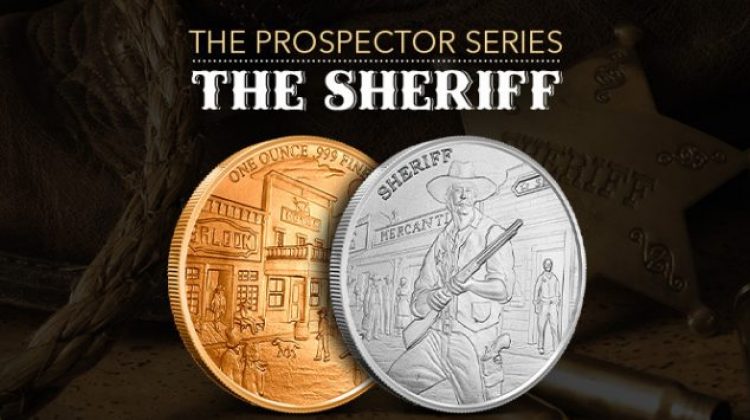 Provident Metals’ popular Prospector Series continues to bring the Wild West to your precious metals portfolio with stunning new designs in 2021. The latest release in the collection reminds us that while the American West was often a violent, lawless place, there were a few brave men willing to step into the breach and ensure the safety of innocent people trying to make a living in a wild world. This week we shine a light on the newest release in the series as the Sheriff joins the Prospector Series at Provident Metals.

On the obverse side of the all-new 1 oz Silver Prospector Series Sheriff Round is the image of an American lawman protecting his town. With a steely gaze and rifle at the ready, this Sheriff has no doubt stepped forward to encourage some wayward individuals to clean up their act or face the consequences. As citizens of the town stop and watch in the background, you will notice that this sheriff may have stepped forward on his own, but he won’t be outgunned. One of his deputies is standing in the nearby doorway of the Sheriff’s Office, while another is ready to provide cover from the roof of the Mercantile.

The reverse face of the Prospector Series Sheriff Rounds comes with the same design that has been used throughout the collection. Life in a small town in the American West plays out as normal in this design. People are coming and going along the town’s main thoroughfare. Horses are hitched up at the local hotel while one man is seen exiting the town’s saloon. The inscriptions on this side read “One Troy Ounce .999 Fine Silver.”

Sheriff Round Options and Details

As with other releases in the Prospector Series from Provident Metals, the new Sheriff Round is available as a 1 oz silver item and as a 1 oz Copper Prospector Series Sheriff Round. Both rounds contain one ounce of their respective metal with .999 purity. The rounds are available individually inside of plastic flips, by multiples of 20 in plastic tubes, or by multiples of 500 inside of Monster Boxes. The Monster Box holds a total of 25 individual 20-round tubes. The new Prospector Series Sheriff design is the fifth release in the collection, and like previous issues, will only be struck for a limited period of time.

The American West attracted Americans and immigrants from all walks of life. The wealthy moved West in hopes of increasing their wealth and taking advantage of the new landscape. Families were seeking a cleaner life away from the increasingly industrialized Eastern United States. Individuals who were down on their luck were hoping to reverse their fortunes with the next big discovery of gold or silver.

At the same time, the lawless segment of society was heading westward as well. Some of these individuals were simply running away from legal troubles in the east. Others were looking to strike it rich, legally or otherwise. Today, Americans elect an individual to serve as sheriff in their county and that person is the highest-ranking law enforcement officer in a given county. In the Wild West, the governmental structure was slow to follow the migrating Americans and immigrants.

When it came time to protect people from outlaws and strongmen, it was often left to the bravest individual who wanted to step forward and put on the badge. In most cases, knowledge of the law wasn’t as important as one’s skill with a weapon. After all, lawbreakers didn’t care if they broke the law and they were quick to pull a gun to solve a dispute.

Get Your Sheriff Rounds in the Prospector Series While Supplies Last!

Provident Metals will have the new Prospector Series Sheriff Rounds in stock while supplies last. With production time-limited, there’s no time to waste if you want to add the newest design to your collection. Provident Metals’ customer service can assist you at 800-313-3315, chat with you live online, or respond to your inquiries via email. Don’t forget to check back each week for a new blog post and follow us on Facebook.