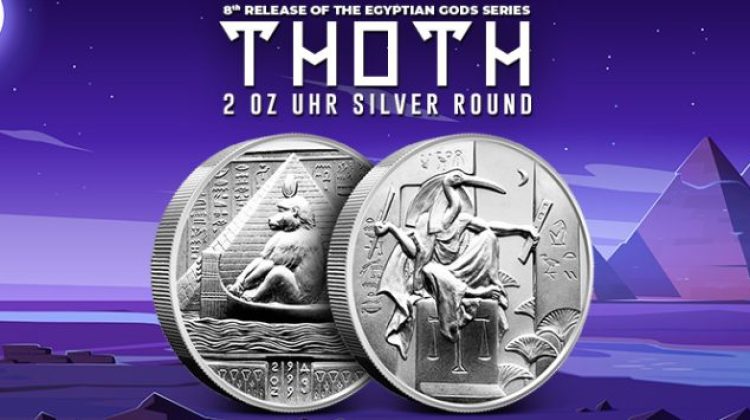 With the holiday gift-giving season on the immediate horizon, the Egyptian Gods Series offers the eighth release with its new Thoth Silver Round. The eighth overall, Thoth is now the fourth design since the Egyptian Gods Series restarted and is expected to continue the higher levels of interest that the new designs have brought to the collection. As with previous issues, you’ll have two beautiful options to choose from when you buy the new Thoth Silver Rounds.

The Patron of Scribes – Thoth Obverse and Reverse

Heidi Wastweet once again created the designs on the obverse and reverse of the 2 oz Silver Egyptian Gods Thoth Rounds. For the obverse of the 2 oz Silver Antique Egyptian Gods Thoth Round, Ms. Wastweet captures the human form of the God of Sacred Texts and Patron of Scribes. Thoth, like other Egyptian deities, has a human body with an animal head. In this case, the ibis is associated with Thoth. His figure is shown seated on a pedestal with various symbols representing his role in Egyptian society.

In his hands, you’ll notice a stylus and writing palette, symbolizing his roles as a recorder of the deities and patron of scribes. If you look at the pedestal, you’ll notice a set of scales. This pays homage to his role in recording the results of the heart-weighing process. Following the death of pharaohs, their hearts were weighed to determine whether or not they would pass to the afterlife. It was Thoth’s job to record these results. The inscriptions on this side include the hieroglyphs that represent his cartouche in ancient Egyptian writings.

In the reveres design of 2 oz Silver Thoth Rounds, the common design elements of a wall of hieroglyphs and a pyramid. In the foreground, you will see the animal form of Thoth. Like other Egyptian gods, there are several animals that Thoth is associated with. While his human form often features the head of an ibis, his full animal form is typically that of a baboon. In this design, the baboon is seated in left-profile relief in a small boat. Inscriptions along the bottom include 2 OZ, 999, and AG.

The 2 oz Silver Egyptian Gods Series Thoth Rounds both come with ultra-high-relief strikes. This type of strike creates a deeper background field with improved 3D relief for beautiful visuals. The antique specimen has a special finish that creates the type of patina you expect on an ancient coin. Both rounds are available individually in plastic flips or by multiples of 10 rounds in protective tubes.

The custom Egyptian Gods Series originally started in the mid-2010s. Heidi Wastweet was the original designer of the first four releases and returned to the program when it was relaunched in the 2020s. To date, the series has eight designs with this Thoth release included. The restart of the series has been met with strong demand.

In the original release, the Cleopatra design that launched the collection generated intense interest with a final mintage of 38,767 rounds. However, the next three issues saw declining interest with the Anubis round hitting only 16,142 and the fourth release, Khnum, hitting just 7,502 rounds.

However, the relaunch in the 2020s has seen an average mintage around 25,000 rounds. Osiris marked the restart of the series and sold 24,800. So far, the Sekhmet has proven the most popular of the new batch with sales of 26,020 rounds total.

With continued, strong demand for the new batch of Egyptian Gods Series designs, there’s no time to waste in getting your hands on the Thoth design. Production of these rounds will be limited to several weeks before it stops to prepare for the next design. Provident Metals’ customer service is available to assist you at 800-313-3315, online using our live chat, and via our email address.