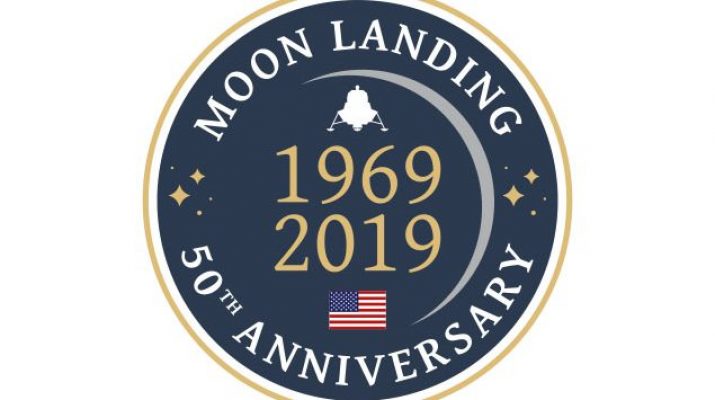 Silver dollars have a long, rich history in the American tradition. Introduced around the same time as the U.S. began its original minting processes in Philadelphia, silver dollars have gone through numerous iterations, from the Morgan Silver Dollar to the Peace Dollar. The exciting history of the American silver dollar is bound within watching the advancements taking place even in modern times. As we watch these developments take place, we are becoming a part of eventual history, watching as the coins come into fruition in modern times. For the US Mint, the coins they produce are not only advancements into the future, but are sometimes relics recreated to reflect on our wondrous past.

Looking into the past, the Summer of 1969 is known for numerous cultural reasons, from Richard Nixon’s inauguration to Woodstock. More importantly, aside from politics and art, the American public underwent one of the most noteworthy moments of human expansion to be ever seen by the globe. In mid-July 1969, NASA’s Apollo 11 program left from Cape Kennedy, headed toward the moon. Soon after, on July 20, the first humans—Neil Armstrong, Buzz Aldrin, Michael Collins—would make the first landing on the moon, with some of them walking across its surface, making for “one small step for man, one giant leap for mankind.” In commemoration of the 50th anniversary of this incredible human feat, the US Mint has produced one of their most notable silver dollars in recent history: the Apollo 11 50th Anniversary Proof Silver Dollar. 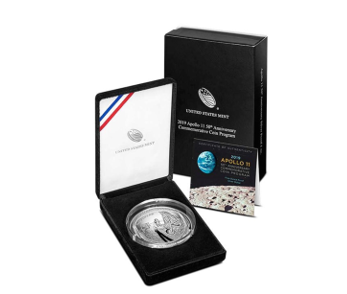 The 2019 5 oz Apollo 11 50th Anniversary Proof Silver Dollar from the US Mint is as much a piece of art and history as it is a coin. Collector, investor, history buff—this coin is sure to capture the attention of those who see it, making for a beautiful reminder of the ingenuity and faith that brought us, as a species, to the moon. This commemorative silver dollar is the first in the United States to be struck from .999 pure silver, a composition far more valuable than past commemorative silver dollars, which would be composed of 90% silver and 10% copper. This is also one of the first domed-shape coins in U.S. history to be struck with a proof finish, reeded edge.

The obverse of this precious silver dollar coin features an engraving of one of the astronaut’s footprints imprinted onto the surface of the moon, a simple representation of the “small step for man” these humans undertook. Alongside this engraving are the inscribed words MERCURY, GEMINI, and APOLLO, all separated by phases of the Moon. 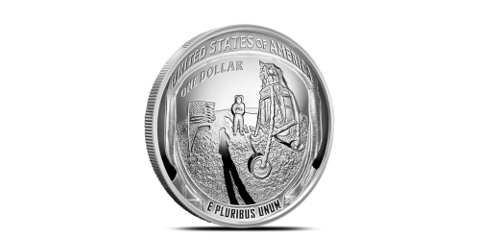 The reverse of this coin features the iconic image known as “Buzz Aldrin on the Moon,” taken on the day of the July 20, 1969 moon landing. What we see is Neil Armstrong, the U.S. flag, and the lunar lander reflected in astronaut Buzz Aldrin’s helmet. Besides this depiction are the engravings UNITED STATES OF AMERICA, ONE DOLLAR, and E PLURIBUS UNUM, adding to the American pride so dutifully represented.

Beyond the exciting historical depictions engraved, this coin holds significant value beyond its face value and metallic content. With each purchase of this commemorative coin, a portion of the cost will be donated by the US Mint to the Smithsonian National Air and Space Museum’s “Destination Moon” exhibit, the Astronauts Memorial Foundation, and the Astronauts Scholarship Foundation. Not only are you able to own a representation of American ingenuity, but you’re able to provide funds to preserving the natural remnants of our past, allowing future generations to interact with them within informative academic environments for the future to come.

The Apollo 11 moon landing was a foundational point in both American and human history. For the first time, we were able to leave the surface of our planet and land on a formation far beyond our reach, within our orbit. That dot we can so easily point out in the night sky suddenly became real—we had been there before; we had done what no other human had before. To remember this history is to preserve it and the Apollo 11 50th Anniversary coin is a reminder of how far we’ve come.