Works of fiction have always been prevalent in pop culture, fueling our imaginations and filling our lives with a sense of adventure. Over the past few decades, the steampunk genre has been gaining popularity among writers, filmmakers, costumers, and other hobbyists. But what is steampunk?

Steampunk reimagines the Victorian time period and culture as science fiction. The industrialized 19th century saw the rise of mechanized manufacturing and increasing urbanization. Steampunk expands on this notion by imagining more modern technologies in the steam-powered setting of the Victorian age. Steam engines are used in new forms of mass transit like airships, and other machinery drives advances in science and business.

Within the steampunk genre, you’ll see characters like aviators, mechanics, explorers, monster hunters, military figures, gunslingers, and aristocrats. These archetypes are generally seen wearing period clothing, with the addition of steam-powered gadgetry. For instance, you might find an explorer who wears a mechanical prosthetic leg or a scientist who wears a mechanized magnifying headset. These characters inhabit a futuristic version of our actual history. The appeal of steampunk is wide-ranging—from those who enjoy the clothing of the Victorian period to those who are drawn to the genre’s reimagining of modern technologies within the confines of  19th century machinery.

Want a better taste of what steampunk embodies? Watch our video—featuring the Angels and Demons Steampunk Series—to see the genre’s aesthetics.

If you enjoyed that, perhaps you’d like to win a FREE silver round from the series! 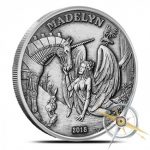 Tell us about your favorite genre—whether books, movies, TV shows, or comics—to enter our giveaway. Commenting below will serve as your entry for our April giveaway. But remember to keep it classy; inappropriate comments will be deleted and disqualified. Submit your comment (one comment only please) by April 22, 2018. One winner will be randomly selected on April 23, 2018 to receive a Madelyn 1 oz vintage silver round from the Angels and Demons Steampunk series.

Good luck to all of our entrants!