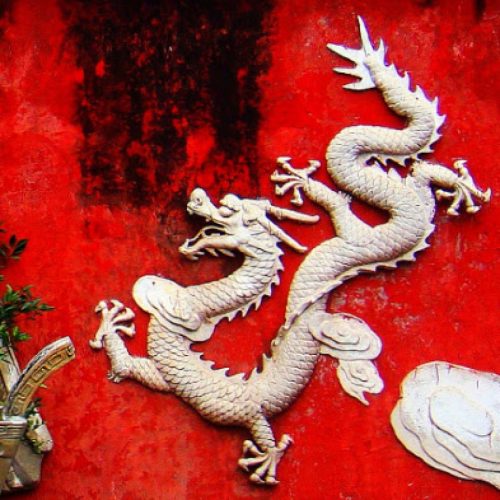 Almost every culture on earth has its own ancient dragon myth. And we are proud to bring them to life in our EXCLUSIVE World of Dragons series of 1 oz silver and copper rounds! The third release in this exciting 6-design series celebrates The Chinese dragon, one of the oldest and most powerful symbols in Chinese history.

No one knows for sure when dragons were first introduced to Chinese culture, but they’ve appeared as far back as 5,000 BC. The figure of the Chinese dragon is thought to be a combination of several ancient Chinese tribal totems, incorporating elements of the sacred number nine. For example, the beast is said to possess nine animal resemblances: the antlers of a stag, the head of a crocodile, the eyes of a demon, the neck of a snake, the belly of a tortoise, the scales of a fish, the palms of a tiger, the ears of a cow, and the claws of an eagle.

Unlike its fearsome, fire-breathing European cousins, the Chinese dragon is a benevolent symbol of strength, good luck, and nobility. To the ancients, it was a water and weather god that could form clouds, hide in deep waters, expand to the size of the universe, or even glow in the dark.

Dragons were a powerful symbol of the emperor in many Chinese dynasties. According to legend, the imperial forefathers were born of dragons. The imperial throne was referred to as the Dragon Throne. And dragons were a prominent feature in imperial palaces and tombs, such as at the Forbidden City in Beijing.

As “descendants of the dragon”, the number nine was also the sacred number of the emperors. Only the emperor and most senior officials were allowed to wear nine dragons on their robes. During the 17th-century Qing dynasty, the dragon was adopted as the national flag. Since that time, it has gone on to serve as the official emblem of the modern Peoples Republic of China.

Depictions of Chinese dragons often show them chasing or fighting over a flaming pearl. The pearl symbolizes wisdom, prosperity, and immortality, which always lies just beyond the dragon’s reach. The Dragon is one of the 12 animals in the Chinese zodiac, and Dragon years are usually the most popular to have children. In fact, even today, there are still more people born in Dragon years than in any other animal years of the zodiac.

The limited edition Chinese Dragon design is the third in a series of 1 oz silver and copper rounds celebrating the dragons of the world. The obverse features the creature’s serpentine form in mid-pounce as it finally grasps the long-pursued pearl of prosperity. The reverse depicts the powerful reptilian eye of the dragon. Its piercing gaze is surrounded by the inscriptions “World of Dragons” along with the metal content, weight, and purity.

Which brings us to…. our June giveaway! Which dragons would you like to see for the final 3 releases in the series? Let us know in the comments! We’ll randomly choose one comment on June 30th to win a FREE 1 oz The Chinese Silver Round and a 1 oz The Chinese Copper Round from our exclusive World of Dragons series! Good luck!

Note: The final mintage of The Chinese will be announced in August 2019. Get yours while you can, because when they’re gone, they’re gone! World of Dragons rounds are released every three months. Each design will only be minted for approximately three months. The fourth release in the series will be available for sale on August 1, 2019. Click the “notify me” button under each design to receive an email for all future releases, so you can be among the first to own each Dragons of the World design!

Previous: The story of the Welsh Dragon: The 2nd release in the World of Dragons series

Next: The story of The Norse dragon: The 4th release in the World of Dragons series